Meatless Monday, MooFree May, Meat Free Monday, Veganuary…plant-based campaigns are sprouting up around the world, each with its own unique spin but all with the common goal of reducing or eliminating animal products from consumers’ diets. Hong Kong has its own initiative, Green Monday, that has been gaining momentum since it first began in 2012. As the name implies, Green Monday promotes plant-based eating for the environmental and sustainability benefits of an animal-free diet. What’s more, the movement represents an on-going effort to partner with Hong Kong businesses to help them reduce their carbon footprint by offering greener, plant-based options. The campaign has successfully worked with over 1,000 enterprises from independent businesses to corporate giants, including MGM Macau, a luxury casino resort.

Rebecca Donnellan, the Director of Sustainability at MGM Macau, told LIVEKINDLY that the resort just celebrated it’s one year anniversary with Green Monday. Donnellan played a pivotal role in this partnership, which resulted in a major overhaul of the employee cafeteria. Thanks to Donnellan and the Green Monday representatives, the MGM Macau employee cafeteria goes completely plant-based every Monday, successfully serving vegetarian and vegan meals to its 11,000 employees.

Donnellan decided to take a chance with the Green Monday initiative due to its positive appeal. Opposed to other movements, like Meatless Monday, which sounds like it’s taking something away, Donnellan claimed that the Green Monday campaign made “a celebration-like statement.” She continued to praise the campaign and it’s founder, David Yeung, for creating both an accessible and approachable concept. “I think David and his team have done an incredible job at promoting Green Monday and quite simply making it commonplace. I think it’s important to make sustainability cool and trendy, something people want to be part of – this is key to engage on a large scale – and this is what Green Monday has done so well.” 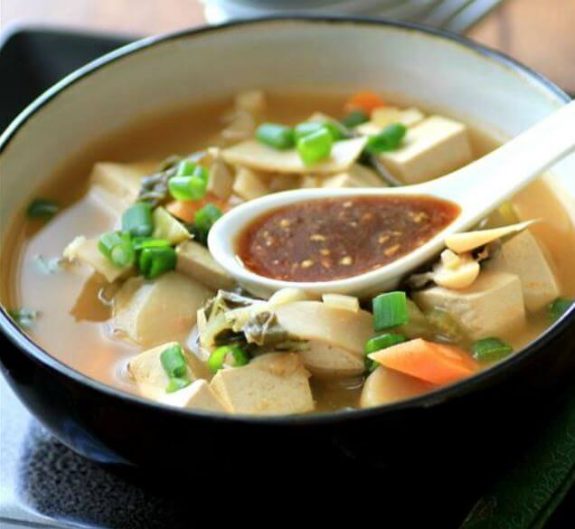 As part of the campaign’s corporate solutions offerings, Yeung and his team worked closely with the MGM culinary staff to develop a plant-based menu that all would enjoy. Yeung explained the education process of partnering with a new business: “First we deliver talks with their staff to explain the reasons behind Green Monday. We have nutritionists who share health tips with their staff. We provide quantitative projections on the CO2, water they save by having a company-wide adoption of Green Monday.”

Regarding the menu itself, the dishes were thoughtfully chosen to cater to the staff’s tastes and preferences. As the majority of the employees come from Mainland China, the menu focuses on traditional Chinese dishes. Donnellan elaborated, “We always offer a starter such as a traditional Chinese soup, 3 choices of hot mains with rice as well as a dessert. We have recently started using plant-based products such as those from Beyond Meat and Gardein which provide a protein-rich, tasty and catchy addition to our meals – who wouldn’t be curious to try ‘fishless fish cakes’ or ‘meatless meatballs’!”

The staff’s reactions, according to Donnellan, were overwhelmingly positive. She said, “A year in [to the campaign] and the queue is always the longest for the Green Monday meals. We did an informal survey of staff asking why they enjoy it so much. I wouldn’t say many are actually vegetarian, but they are happy that we’re doing it and enjoy being part of the initiative to cut meat consumption every week.” Part of this enthusiasm is due to Donnellan’s work. “We make a big effort to make it fun and make a lot of noise about it,” she explained. “Every Monday our chefs where Green Monday aprons that are green and have our ‘MGM Go Green’ logo on them and we play videos on our TV screens that are throughout our employee dining rooms talking about the initiative and why it’s important. We also celebrate milestones and get senior management involved.” The MGM is big on celebrations. For its recent one year Green Monday anniversary, the employee cafeteria served the Beyond Burger for the first time, inviting the “Green Team” upper management to flip and serve burgers to staff alongside the chefs.

Although the MGM Macau may be the largest Green Monday adopter, the plant-based lifestyle is beginning to catch on in Hong Kong. Donnellan noted, “I know it’s getting so popular in Hong Kong to have plant-based options. I’m so glad to see many ‘mainstream’/non-vegetarian restaurants in Hong Kong now offering the Beyond Burger and now the Impossible Burger, for example.” Yeung agreed that the plant-based business is buzzing, and offered an explanation for the boom, “I think a lot of companies want to do Corporate Social Responsibilities but they need platforms and solutions. Sustainability certainly is an angle that resonates. Also, the Hong Kong Stock Exchange started requiring listed companies to submit ESG [Environmental Social and Government] reports so that’s an extra reason why companies become very open to new ideas.”