Shaiann Hogan, a 14-year-old Los Angeles native, was recently featured on Good Morning Washington’s Motivational Monday segment for creating a cruelty-free, vegan nail polish brand when she was just 10 years old. The young teen informed the television host that she wanted to take “a fresh approach to the beauty industry.”

Shai’s World began when young Shaiann was found rummaging around her mother’s makeup collection. Instead of banning her curious ten-year-old from her makeup drawer, Shaiann’s mother encouraged her to start her own nail polish line. With some research and financial help from her parents, she took on the challenge and launched her cruelty-free company.

When it came to the ingredients, Shaiann insisted that her products be completely plant-based. Some polishes on the market contain animal-derived chemicals and substances, such as camphor, toluene, formaldehyde, dibutyl phthalate, and formaldehyde resins, but the conscious-minded entrepreneur educated herself and knew to stay away from these common polish ingredients. When asked why she created a vegan line, Shaiann told Good Morning Washington that she made it for her grandmother, who is a two-time cancer survivor. 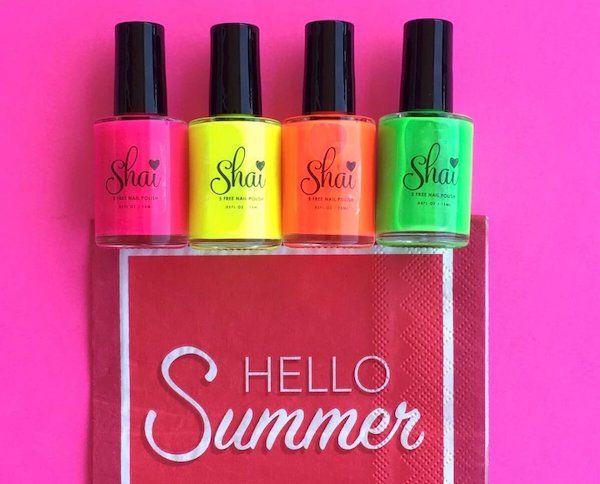 The polishes come in eight rainbow-inspired colors, in addition to a seasonal collection of five additional hues. The pretty pastel spring set is currently available, but the bright neon summer collection will soon launch on July 9. Shaiann also mentioned that she is working on a white polish as well, and may branch out into lipglosses in the future. One thing is certain – this is definitely not just a phase.

After running her company for the past four years, Shaiann offered some advice to other children. “Go for [your] dream. Don’t have any limits to what you think…Just give it a shot” she advised.

Children and young teens are increasingly embracing the entrepreneurial spirit and channeling it toward cruelty-free endeavors. In Australia, 10-year-old Sofia Rizzo launched a biodegradable glitter company, Glitter Girl, and in Texas, an eighth-grade student named Aiden developed a website to match shelter dogs with potential adopters. One is never too young or too insignificant to be a voice for animals. Anyone can create positive change in the world around them.