A 26-year-old entrepreneur has launched crowdfunding campaign for her New Zealand-based dairy-free milk brand. Called Milk 2.0, the vegan beverage is made from a blend of nuts and seeds and a small bottle is said to have as much protein as two eggs.

The company’s founder Kristina Ivanova, a 12-year vegetarian and Russian expat who now lives in Auckland, told local news source the Scoop that she saw a huge opportunity in the New Zealand vegan food market for milk made with whole food, plant-based ingredients.

“The supermarket shelves had plenty of non-dairy milks, but all of them contain emulsifiers, preservatives, gums, additives, and only a small percentage of actual nuts,” she said. Last February, she quit her marketing job to focus on Milk 2.0 full-time.

Milk 2.0 is made from a blend of almonds and cashews, is sweetened with dates, natural vanilla, and Himalayan pink salt. According to the brand, each bottle contains ten times the nuts and seeds of conventional nondairy milks and is made without emulsifiers, gums, or preservatives. 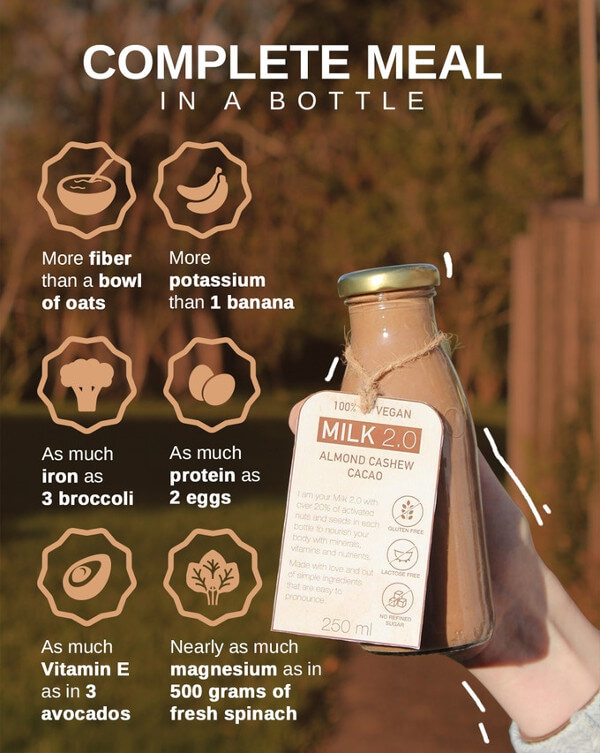 Ivanova claims that her dairy-free milk is a “complete meal,” with one 250 ml bottle providing more fiber than a bowl of oats, more potassium than a banana, nearly as much magnesium as 500 grams of spinach, as much iron as three servings of broccoli, as much vitamin E as three avocados, and as much protein as two eggs.

In October, Ivanova launched Milk 2.0 at the Coffee and Chocolate show in Auckland in two flavours, Pure and Choco, both of which sold out within hours. She noted that the demand for vegan products, in general, is “skyrocketing” among New Zealand consumers.

“The difference is amazing from when I first became vegetarian 12 years ago in Russia to now. Back then I was pretty much alone but now you just have to look at the New Zealand supermarket shelves to see the growth of people switching to plant-based diets,” she said.

The entrepreneur is also committed to quality and sustainability: Ivanova taste tests every batch of Milk 2.0 herself before it is bottled (in glass, not plastic).

“Coconut yoghurts, nut milks, animal-free meat substitutes made from peas: the demand for products made out of plants, not animals, is growing massively,” she continued. “People, especially in my generation, are switching to no-meat or low-meat diets because they realise it’s better for their own health, and the health of the planet.”

Ivanova launched her crowdfunding campaign earlier this month and hopes to raise $45,000 by November 27 in order to buy commercial kitchen equipment, lease a small kitchen, invest in research and development, and to cover legal food compliance costs. For more information or to back Milk 2.0, see here.