This Thanksgiving, millions of Americans will be eating turkey, an animal that is intelligent, highly social, affectionate and loves to play. Did you know turkeys are really good at geography? Turkeys also exhibit problem-solving behavior and are curious and inquisitive animals.

According to PETA (People for the Ethical Treatment of Animals), about 44 million turkeys are killed for Thanksgiving alone. Virtually all turkeys spend their entire lives on factory farms and have no federal legal protection. They are hatched in incubators, never see their mothers, and are moved into crowded warehouses where they spend the duration of their lives until they are slaughtered.

Is Eating Turkey Bad for You?

Not only are turkeys treated poorly, but studies have also shown that eating meat and other animal products (including dairy, fish, and eggs) comes with health risks. But these days, celebrating a compassionate, healthy vegan Thanksgiving comes with so many meatless options.

Consider the following medical science-backed reasons to leave turkey off of your plate, not only for your health, but for the many beautiful animals you can save as well. 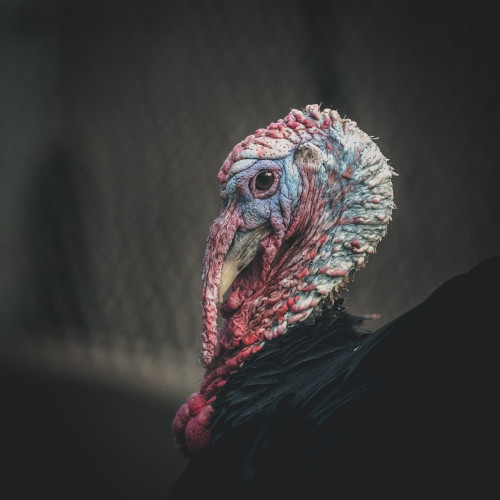 1. There Is a Risk of Ingesting Salmonella With Your Turkey

Recently, a salmonella illness outbreak linked to raw turkey products has spread to 35 states and made 164 people seriously ill.  The outbreak has sent 63 people to the hospital and one person in California died.  The scary part is – this salmonella has been found to be MULTI drug-resistant. Why does this occur?  Turkeys are crowded into poorly ventilated industrial production facilities, a breeding ground for bacteria, sometimes with as many as 10,000 packed into a single factory building.

Research from the CDC found 85 percent of urinary tract infections are caused by E. coli bacteria, which can often be found in poultry. This is likely due to the amplification of drug-resistant E. coli on the farms because of improper or overuse of antimicrobials during food animal production. (And by the way, there are between 6 and 8 million UTIs in the US each year.) Research has shown nine out of 10 samples of turkey have been found to be positive for E. coli, and turkey also had the highest contamination rates for E. faecalis and multidrug-resistant E. faecium.

3. It Can Lead to Unwanted Weight Gain

The EPIC-PANACEA study evaluated a total of 103,455 men and 270,348 women aged 25-70 who were recruited between 1992 and 2000 in 10 European countries to evaluate whether meat intake may be related to weight gain. The study showed that total meat consumption was positively associated with weight gain in men and women, EVEN when adjusted for total calories consumed. And what kind of meat was associated with weight gain? Poultry, red meat, and processed meat.

The Seventh-day Adventists study compared cancer rates of 34,000 vegetarians and meat-eaters. The results showed that those who avoided poultry, as well as meat and fish, had dramatically lower rates of prostate, bladder, and colon cancer than meat-eaters did.  Another large study published in the British Journal of Cancer showed that the incidence of all malignant neoplasms combined was lower among vegetarians than among meat-eaters, with the most striking finding was the relatively low risk for cancers of the lymphatic and hematopoietic tissues among vegetarians. Additionally, the prospective NutriNet‐santé cohort looked at the association between a pro-plant-based dietary score and cancer risk. The study found the more plant-based products individuals consumed, along with lower intake of animal products was associated with lower cancer risk.