‘Go Vegan World‘ has launched 500 new vegan advertisements across the UK, from huge billboards to back of the door adverts in public toilets at nationwide train stations. Go Vegan World is a public advertising campaign run by ‘Eden Farmed Animal Sanctuary, Ireland‘; it’s the first large scale national public campaign in Europe. The organisation gained prominence earlier this year in a landmark ruling by the Advertising Standards Agency which cleared their advert ‘humane milk is a myth’, rejecting the dairy industries complaints and ruling that the advert was not misleading. 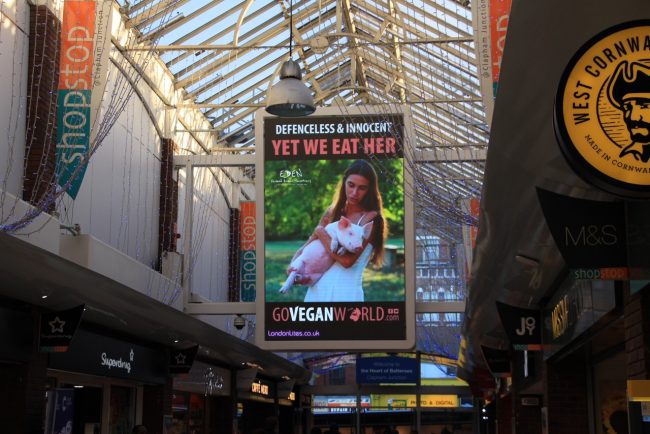 In addition to these 500 new billboards they’ve had a full page ad in the Independent, coverage in the Metro and a TV advert which aired on Sky, Freeview and Virgin Media. These adverts focused on the dairy industry and the bond between mother and calf, as Sandra Higgins, Campaign Director for ‘Go Vegan World’ said:

“I went vegan the day I visited a dairy. The mothers, still bloody from birth, searched and called frantically for their babies. Their daughters, fresh from their mothers’ wombs but separated from them, trembled and cried piteously, drinking milk from rubber teats on the wall instead of their mothers’ nurturing bodies. All because humans take their milk. Their sons are slaughtered for their flesh and they themselves are slaughtered at 6 years. Their natural lifespan is 25 years. I could no longer participate in that. Can you?”

The new adverts are in prominent places and include large, striking billboards using powerful words such as: “Humane milk is a myth: don’t buy it” and “Humane eggs are a myth: don’t buy it.” Alongside smaller adverts in public toilets in busy train stations across the nation, such as Kings Cross Station, Victoria Station and Edinburgh Station. 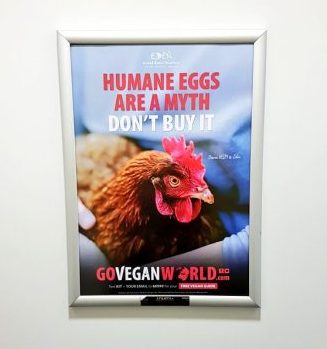 “The greatest problem on earth today is the notion that some lives matter less than others. We imagine that non-human lives hardly matter at all. We live as though our difference from other species entitles us to use them and that they exist for our benefit. This view is not only inaccurate, it is unethical.”