If you’re a newbie to the wide and wonderful world of veganism – or simply veg-curious and have been browsing though recipes for food inspiration – chances are, you’re unfamiliar with some (or many) of the unusual (yet amazing) ingredients required.

You can find simple recipes to help start your journey and you certainly don’t have to eat these 13 things – but they are commonly associated with a vegetarian/vegan diet and are often required (and very useful) when replacing animal products.

So – if you’re lost or inquisitive – this helpful guide is for you!

A Guide to 13 Unusual Ingredients in Vegan Recipes 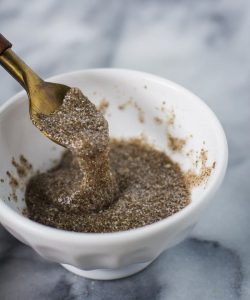 Chia seeds come in black and white varieties, which can be found whole or in ground form. When mixed with a liquid, they swell up (to a max of three times the size of each seed) and absorb the liquid they are in. Aside from making a fun gel-like substance which works brilliantly as a binder/egg replacer in many recipes – chia seeds are a complete protein, meaning they contain all 9 essential amino acids. These ancient seeds are also high in fiber, antioxidants, manganese, phosphorous, minerals and omega-3 fatty acids.

Add chia seeds to your gym water bottle, smoothies, juice, baking, parfait, vegan yoghurt or overnight oats – to give you that extra energy boost, fill your hunger pangs between meals and replenish your electrolytes. 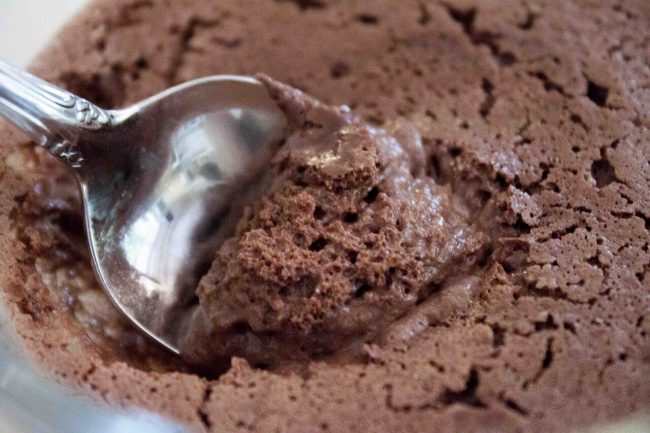 This versatile ingredient does wonders to emulate egg whites, even if it is a bit slimy. With a neutral flavor, this ‘wonder’ ingredient allows you to create all your favorite egg recipes, sans egg! From meringues, pavlova, brownie, cake, muesli slice and more – aqauafaba knows no limits. Plus, it’s cheaper (merely 3 tablespoons is enough to replace one egg) and better for you than a chicken egg (no hormones, cholesterol or cruelty here!). Aquafaba is that brine/juice that comes in a can (or homemade batch) of chickpeas or another neutral bean – vegan protein is aquafaba’s middle name. 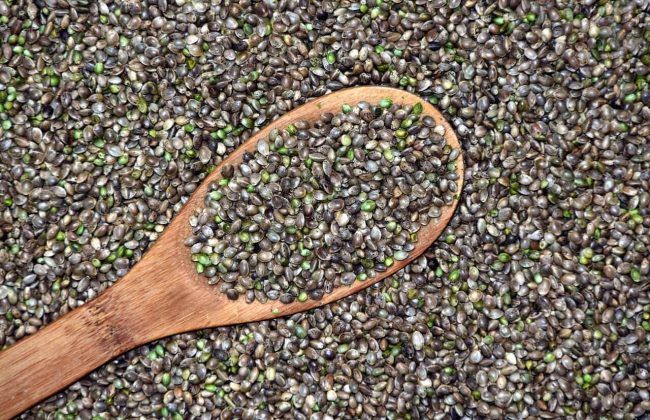 One of a few complete plant-based protein sources, hemp also boasts a high content of omega-3s (yep, fish-free 0-3s) and high nutritional content. Despite the mistaken association with its mood-altering cousin cannabis – hemp is actually reputable for being the easiest to digest and most nutritious food source on the planet. A feature in Thrive by athlete Brendan Brazier said hemp is the only dietary source of edestin (an amino acid) — an integral part of our DNA. Brazier concluded this “makes hemp the closest plant source to our own human amino acid profile.” 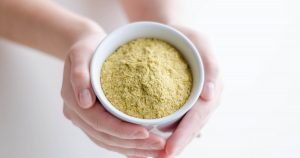 For new vegans and newbies to the ‘nooch’ obsession club – this life-changing ingredient is properly known as nutritional yeast. This deactivated yeast is popular with most vegans as when combined with other plant-based ingredients – takes on a cheesy, nutty, savory taste. Hence – making the perfect, dish make-or-break for veganized dishes that would usually require cheese. Fortified ‘nooch’ also contains significant levels of complex B-vitamins, including vitamin B12. 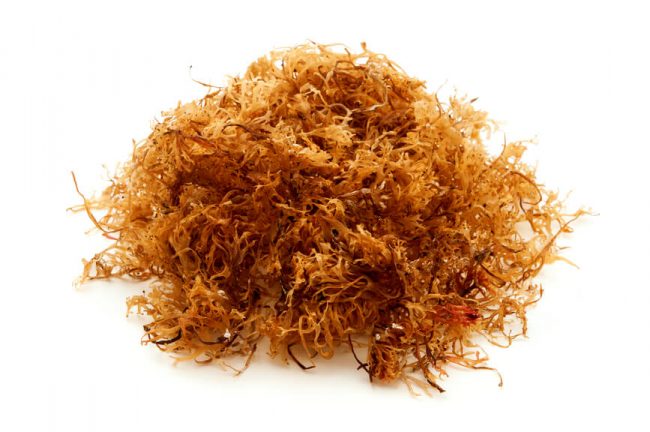 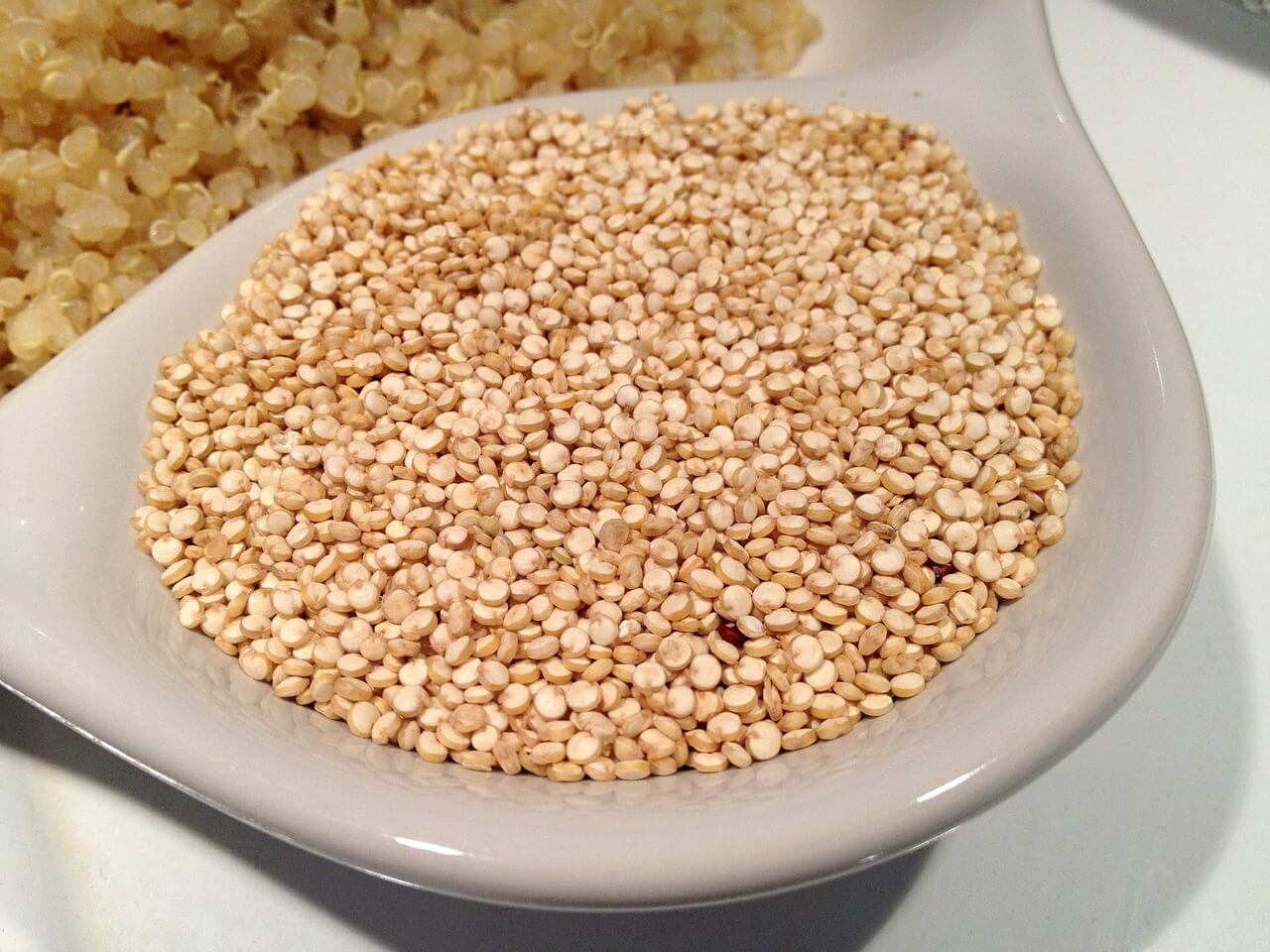 This ancient grain (biologically a seed) is pronounced “keen-wah”. A member of the amaranth family, quinoa cooks faster than rice or barley; it only takes 10-15 minutes to cook – and contains all nine essential amino acids, making it a complete protein. This versatile and healthy food is also suitable for those on a gluten-free diet and contains zero cholesterol! 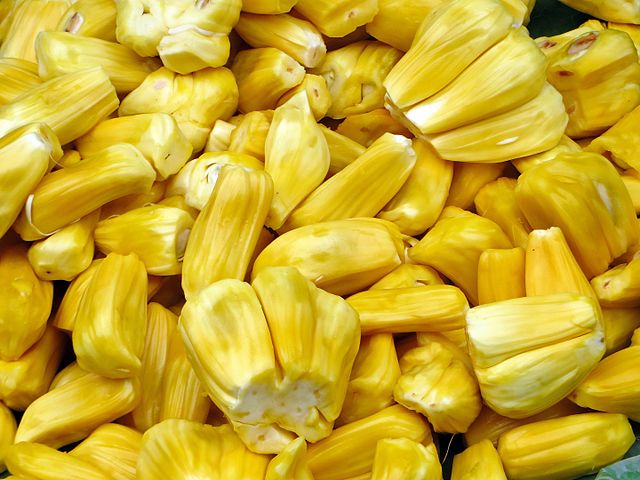 This versatile fruit often becomes a staple in meat-free diets, as it has a remarkably similar texture to pulled pork, chicken or duck. Jackfruits can get very large and prickly on the outside – yet have tender, juicy flesh once opened. When cooked, the fruit flesh has a shredded, meaty texture. Ripe jackfruit can be eaten raw or cooked, but the stringy, green, unripe jackfruit is most useful for interesting meat substitute recipes. Find 10 recipes that utilise jackfruit in interesting ways here. 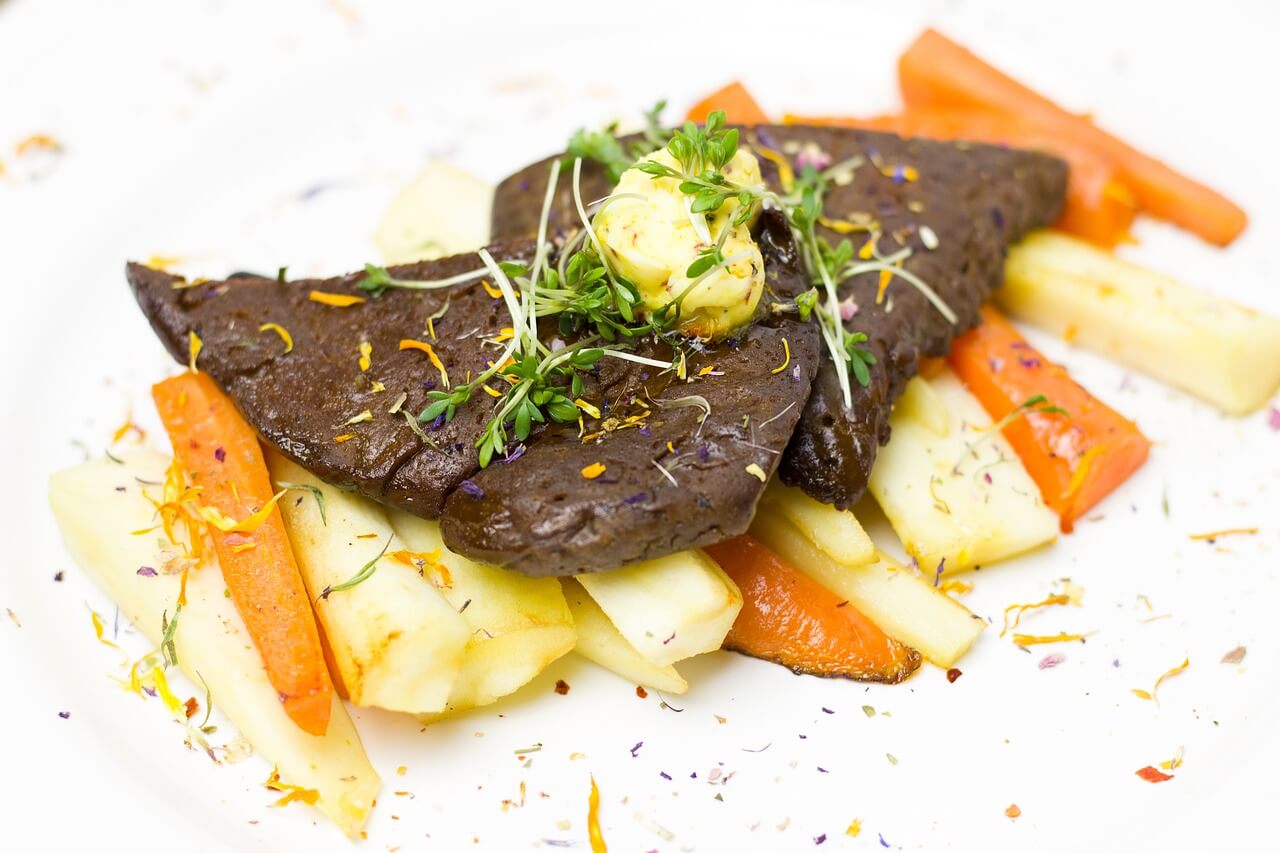 Seitan, also known as wheat gluten, is a plant-based alternative to meat that has a believably close texture to animal flesh. Seitan is very high-protein, boasting a staggering 72g per one-cup serving – when seasoned similarly this plant-based alternative can fool even the most devoted meat-eaters. From vegan sausages, burger patties or meatloaf – seitan can be used in endless dishes. Find 7 great recipes here! 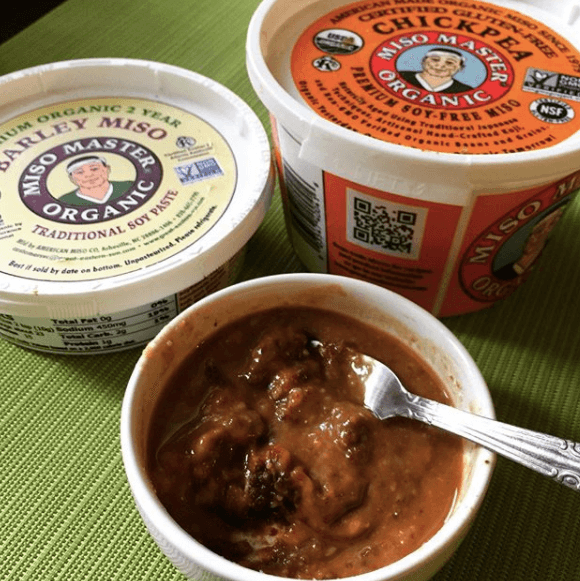 The king of umami, miso is a fermented paste made from soy, rice, chickpeas and other beans or grains. A staple in Japanese cuisine, you’ll find miso makes an excellent soup base, but it’s also great in dressings, dips, sauces, spreads and more. 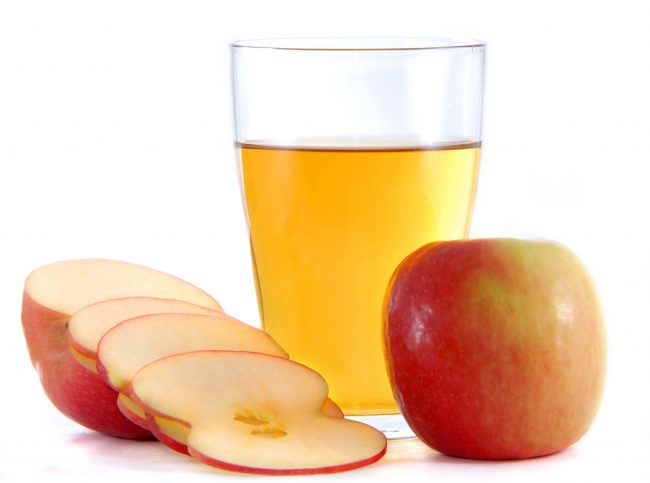 Apple cider vinegar (ACL) is made from pulverized and fermented apples – this often replaces white vinegar in vegan recipes, as some white vinegar is made from cow milk casein. This ingredient has even been shown to reduce blood glucose levels; a symptom of diabetes. Another study showed apple cider vinegar may also kill or slow the growth of cancer cells. Drinking merely a couple of tablespoons per day or using ACL in a batch of muffins could be doing more good for your health than expected. 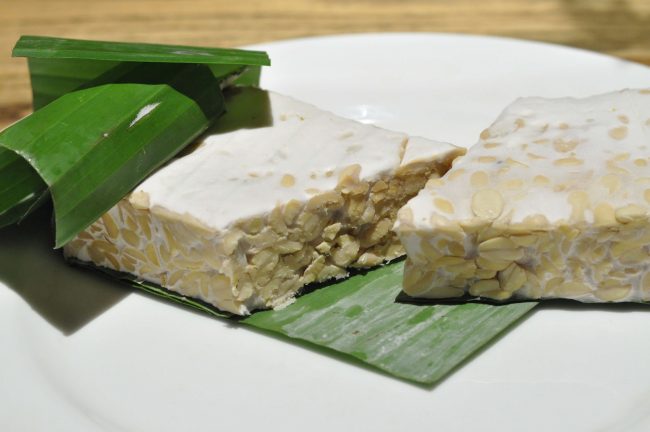 Contrary to the popular belief that soy causes cancer and gives men boobs – a study has actually suggested that soy fights cancer – so load up your plate with these bean cakes! Thankfully, tempeh is a block of protein made from fermented soybeans. Tempeh is full of healthy bacteria and works well in numerous recipes. Try grilled tempeh, tempeh sandwiches, BBQ tempeh, spicy tempeh cubes and more – tempeh will pick up whatever flavor it is cooked with. 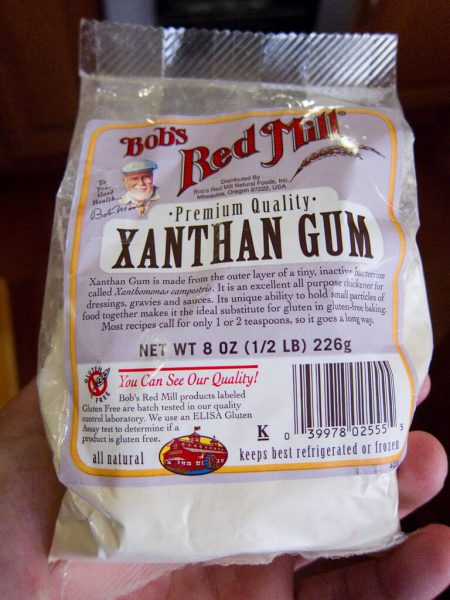 Xanthan gum is a compound which is made by combining fermented sugars that contain a certain kind of bacteria – xanthan gum can be used to make medicine, help reduce blood sugar (especially for sufferers of diabetes) – or it can be a laxative. Most commonly, xanthan gum will be used to thicken and stabilise processed foods. 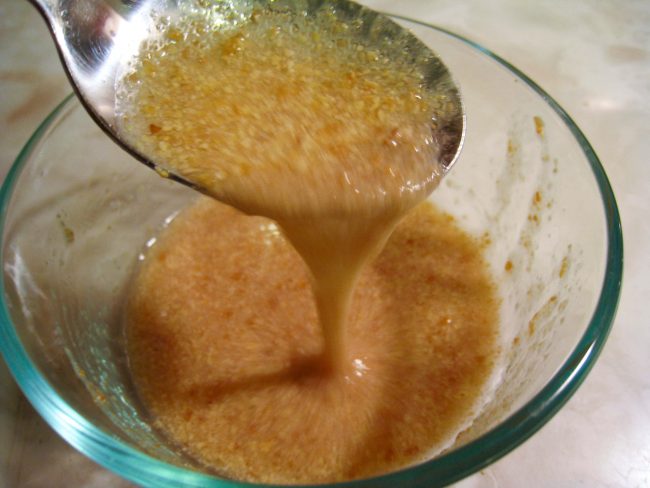 Flax ‘eggs’ are made from ground or whole flax seeds (also called linseeds), mixed with water. This combination works well to replace chicken eggs, when veganizing your favorite recipes. Flax seeds also work well to thicken other recipes/smoothies – and are high in dietary fibre and alpha-linolenic acid (ALA), an omega-3 fatty acid. Even baking flax seeds for hours doesn’t significantly decrease the ALA content. Researchers have ranked flax seeds are the greatest source of lingans (phytonutrients which provide antioxidant benefits) in the human diet.