Vegan actor, James Cromwell, is a highly recognized public figure. Adults and children alike are familiar with his expansive work, from his role as Dr. Arthur Arden in “American Horror Story” to his beloved portrayal of Farmer Arthur Hoggett in the classic family film, “Babe.” Although still active in the entertainment industry, Cromwell is making a name for himself through his animal activism. His most recent work will debut just before Easter Sunday, in the form of a radio PSA encouraging the public to “bag the bacon and give ham the old heave-ho.”

The thirty-second ad, sponsored by People for the Ethical Treatment of Animals (PETA), takes a friendly, nonconfrontational approach. Cromwell introduces himself then explains how his curly-tailed co-actor in “Babe” helped him realize how intelligent pigs are. “Did you know that pigs can play video games…and even fetch a ball just like a dog?” Cromwell asks. He continues, “I developed a lot of respect for them and stopped eating them. Won’t you join me in bagging the bacon and giving ham the old heave-ho this Easter?”

Not to leave the listeners without anything to eat, Cromwell concludes with, “You can find tasty, vegan, pig-free holiday recipes at PETA.org.” The site features suggestions for a full vegan Easter brunch, as well as vegan-friendly Easter candy and alternatives to egg dyeing. 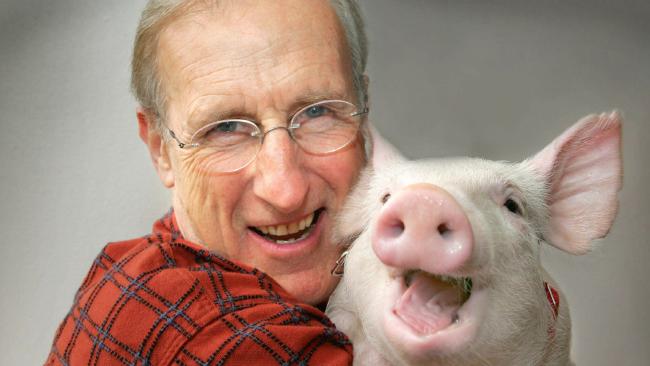 The PSA follows Cromwell’s last project with PETA – a 2018 Super Bowl television commercial that exposed the lies of the meat industry. In the ad, Cromwell plays a priest, listening to a meat industry leader confess his sins. “I’ve lied,” the man admits, “to the world…I’m the guy who came up with free range for all the chicken packaging, but there’s no range. It’s just big warehouses they’re all crammed into.” Cromwell’s expression is beyond disappointment. When asked for penance, Cromwell somberly says, “There is no penance. There’s no forgiving you either…for the love of God, we have to draw the line somewhere!” In comparison to this jarring advertisement, Cromwell’s Easter ad is far more docile, targeting the family market.

Cromwell’s efforts are not limited to behind-the-scenes work. Last year, he participated in a protest against SeaWorld, taking over the “Orca Encounter” show. Using a megaphone, he spoke to the audience about the theme park’s mistreatment of orcas, until he was detained by park security.

A vegetarian since the seventies and a vegan since the mid-nineties, Cromwell is invested in animal welfare, and he is capitalizing on his platform to persuade others to do the same.