Longtime vegan and animal rights activist Joaquin Phoenix revealed his reason for going vegan during a recent interview with Collider to discuss his new thriller, “You Were Never Really Here.”

The interview touched upon a variety of topics. Phoenix spoke to his interest in Marvel movies, childhood collections, weekend plans, the new movie, and finally, what inspired him to ditch animal products.

“I’m really into animal rights, and I know you are too,” Steve Weintraub, the interviewer, began. “This is completely not about moviemaking, but it’s something I want to talk about because I love animals. What was it about, that got you into wanting to support animal rights? How did that all come up in your life?”

Phoenix recalled a moment nearly forty years ago when he and his family were on a fishing trip. “They were catching fish, and I guess to stun them they were throwing them against the side of the boat,” Phoenix said. “I just had a profound strong reaction. It felt like a real injustice. It wasn’t just me, it was my siblings, all of my siblings, except for the youngest, Summer, she wasn’t born.” 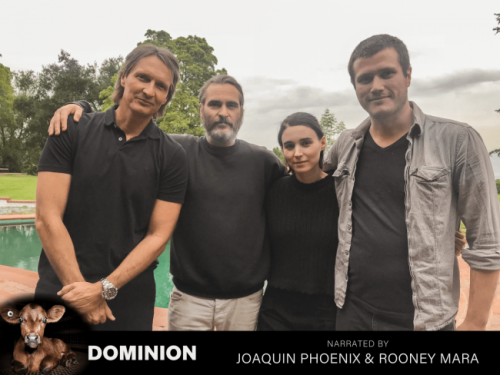 “I don’t know how to explain it. I think it made me distrustful, and angry, and frightened of humans, humanity,” the plant-based celebrity continued, recalling the strong impact the experience left with him. “I just thought it was such a gross abuse of power in a way. I think that during that moment we knew that we were not going to eat meat anymore. We said to our parents, ‘Why didn’t you tell us?’ It’s amazing. I remember my mom’s face, I remember her crying. She didn’t know how to answer. It became very obvious we weren’t going to eat meat anymore.”

The family decided that meat was no longer an option to eat, but not long after that, Phoenix says that they made the switch to a vegan lifestyle: “a few months later, [my brother] said, ‘We shouldn’t be using dairy either. It’s not killing them, but …. Then we became vegan and my sister Summer was born vegan.”

The star also revealed that he hasn’t been 100 percent perfect. He recalled a moment during his childhood when he tried non-vegan pizza. “I ate that, but I got very sick,” he said.

Phoenix is a vocal animal rights activist, having recently starred with actor Rooney Mara in “Dominion,” a documentary that explores the various way animals are commodified in Australia. He also recently appeared in an anti-wool advertisement during this year’s New York Fashion Week, sporting a vegan wool suit by luxury cruelty-free brand Brave GentleMan.