German-American actor and model, Zazie Beetz, known for her role as Domino in the forthcoming “Deadpool 2,” helped get in “ass-kicker” shape with training fueled by her vegan diet.

The actor occasionally posts on social media about her low-waste vegan cooking and lifestyle. She revealed via the social media platform that she makes her own kombucha and reuses old jars for drinking out of and holding homemade body butter. 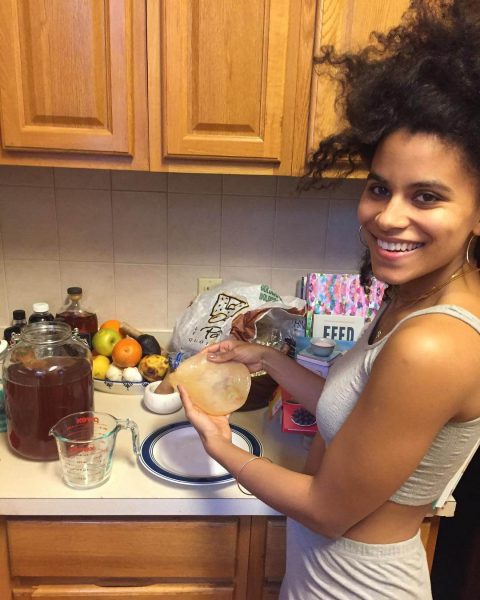 The vegan diet is popular among celebrities as of late. Beetz’s chiseled physique follows in the footsteps of fellow Hollywood action-hero, Chris Hemsworth. During his portrayal of Thor in the Marvel Studios film series “Avengers”, Hemsworth consumed a vegan diet. Hemsworth’s brother, Liam, who plays Gale in “The Hunger Games” film series, is said to have spurred Chris on his plant-based path when he adopted veganism in 2015. Liam Hemsworth’s partner, singer Miley Cyrus, is also an outspoken advocate for the vegan diet. The star recently launched a line of vegan clothes and shoes with Converse. The actress attended the Met Gala in New York last weekend sporting a custom vegan dress from designer Stella McCartney and custom vegan shoes by MINK. “Not killing animals is fucking hot! It’s so much cuter to NOT kill animals!” the star told reporters.

Rapper Will.I.Am spoke out about his recent switch to a vegan diet after a health scare a few months ago. In an effort to dispel plant-based protein myths, the artist told the Evening Standard about his decision.

“When you go to the doctor and he says, ‘You have high cholesterol and blood pressure and I’m going to provide you with pills’ you’re like, ‘Pills? I’m 42.,” Will.i.am said. “Why do I need to be taking the pills that my uncle takes? He’s 60-plus.’”

Actor Kate Winslet recently opened up about her plant-based household — the Academy Award winner is vegetarian and her husband is vegan. “Our fridge is always full of spinach, kale, cucumbers,” she said.