New Yorkers looking up at the digital Times Square billboard for the past two weeks, may have seen an ad posing the question: “Where do you get your protein?” Its aim is to promote the documentary film “From the Ground Up,” which looks at athletes going vegan to enhance performance.

The filmmakers told LIVEKINDLY the billboards have already made an estimated 490,000 impressions in two weeks. 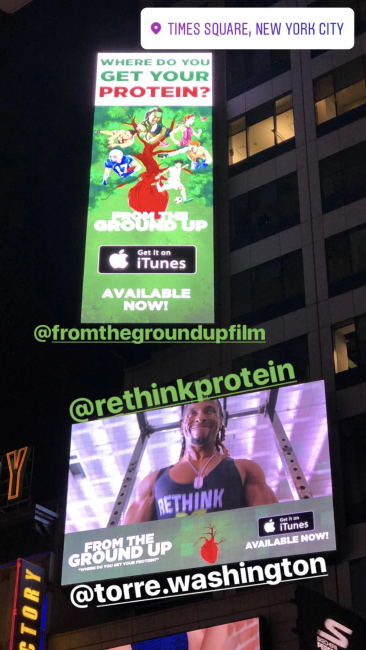 “In the feature documentary ‘From the Ground Up,’  former meat-eating college football player Santino Panico goes on a journey to rediscover the athlete within—this time, as a vegan,” The film’s website says . “As he meets with vegetarian and vegan elite competitors, this story about food and sport expands to confront the social norms and far-reaching impacts of food choices.” 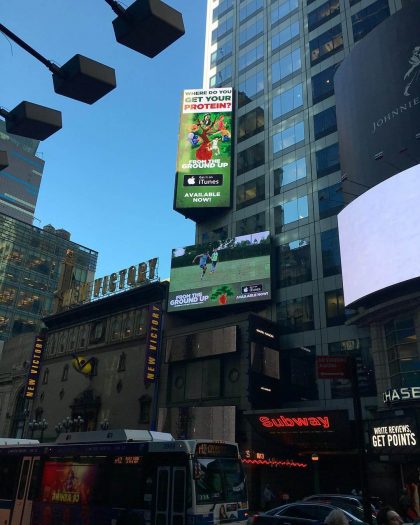 A key message in the film is the role of protein in athlete’s diets. According to the film trailer, protein may not be the most important nutrient for sports professionals. Instead, being conscious of consuming sufficient fiber, vitamins, and minerals could play a more significant role. “There is this very common misconception that if you’re eating a plant based diet, if you’re not eating meat, that you’re going to suffer a protein deficiency,” said Rich Roll, who is one of many vegan athletes that feature in the film.

“From The Ground Up” is currently available to watch via purchase on Amazon, Google Play, and iTunes.

The filmmakers say the campaign continues, with plaster billboard going up in Manhattan by Wednesday or Thursday.

Image Credit: From The Ground Up