As vegan meat, dairy, and other alternatives gain an increased presence in Western supermarkets, one might get the idea that plant-based diets are something new. But in many regions across the globe, eating little to no meat has been a cornerstone of national cuisine. Africa is one example. For centuries prior to European colonization, food was often vegetarian.

The Rising Influence of Meat

Goat meat and fish made up small portions of many regional African diets. But today, meat consumption is on the rise.

“What Ghana and many countries with growing economies are seeing are nutritional transitions,” Afia Amoako, the author of the blog The Canadian African, tells LIVEKINDLY in an email.

“As more people enter the middle class, there is more appetite for things that might have been difficult to have much of as children,” she continues. “This includes more cars and for many having more supply of meat.  It doesn’t help that fast food companies are seeing our largely unregulated food system as a market for potential growth.”

Amoako adds that there’s a name for this: nutrition transition. This explains a shift in dietary consumption that coincides with economic development. It’s most often used to talk about a shift away from more grain and fiber-rich diets toward processed meat-heavy Western dietary patterns.

Amoako, who went plant-based for the environment, dedicates her blog to sharing affordable recipes that pay homage to her Ghanaian roots and other cuisines from around Africa. She also explores broader topics, from healthy lifestyle tips to identity. The goal is to make African cuisine more accessible to all. She adds that her favorite dish is “red red”, a bean and plantain-based stew made with tomato, onion, peppers, garlic, and ginger.

Tendai Chipara, the Zimbabwean blogger behind Plant-Based African, adopted a whole foods, plant-based diet after being diagnosed with type-2 diabetes in 2018. Prior to that, she struggled with other health issues such as anemia, fatigue, joint pain, and depression.

“I realized that I was going down a slippery slope that would end up with me without limbs, blind or worse dead,” she says. “Looking at evidence-based research the most successful way to deal with insulin resistance is to adopt a whole food plant-based diet.”

Chipara explains that growing up, the dishes she ate emphasized plant-based ingredients more than meat. Like other West African cuisines, meat is typically added for flavor. Chipara prefers to leave meat out altogether, but she has also begun incorporating mushrooms or soy chunks. 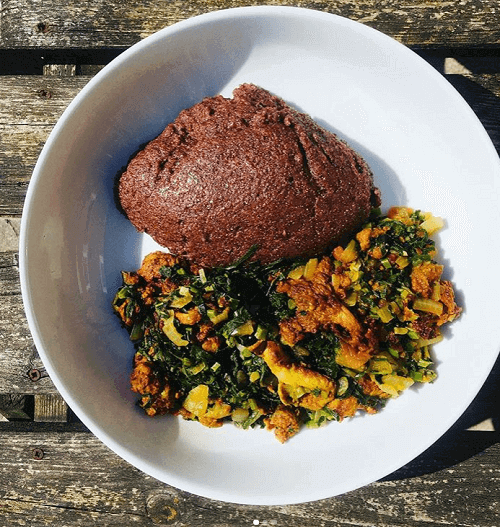 ‘Our Ancestors Followed a Plant-Based Diet’

Fermented food and drinks are common in Zimbabwean food. Common produce includes muboora (pumpkin), magaka ane minzwa (horned melon), and mbambaira (sweet potatoes). Oils, tomatoes, and onion are the “bedrock of most Zimbabwean dishes,” Chipara adds. “The ‘supu’ or sauce is important it can make or break a dish.”

Chipara adds that the plant-based movement is not new to Zimbabwe: “Our ancestors followed a plant-based diet and they thrived and most died of old age. The food they ate was organic and meat and meat products were consumed minimally.”

Many foods marketed as “superfoods,” she adds, are foods that she grew up eating, such as avocados, moringa, and baobab. While Zimbabwean cuisine is easy to make plant-based, meat is a common ingredient. But, it wasn’t always this way. The increase in meat consumption is linked to European colonialism.

“The unfortunate thing that happened to us a people was colonization which led to a massive change to our food production, access to land, and the emergence of processed foods,” Chipara explains. “We now have a high number of the population being affected by lifestyle-related issues such as type-2 diabetes. So I am very passionate about Zimbabwean plant-based cuisine because it is medicine.”

Be Generous With Spices

Tomi Makanjuola, founder of The Vegan Nigerian blog and author of the “Plantain Cookbook,” is a Lagos, Nigeria-born entrepreneur living in London. She explains that “a couple of traditionally plant-based Nigerian dishes include yam pottage and stewed beans with plantain.”

She adds that both dishes are “absolutely delicious.”

Other common ingredients in Nigerian cuisine include yam (also referred to as African yam, which has rough brown skin and off-white flesh), cassava, okra, egusi (melon) seeds, and cocoyam (taro).

Makanjuola enjoys making vegan versions of meals that traditionally include meat, such as pepper soup. Yam and scotch bonnet peppers are the key ingredients in this spicy dish. Egusi soup, which features leafy greens, ground egusi seeds, tomato, pepper, and onions, is another favorite recipe.

For these, Makanjuola prefers whole food, plant-based substitutes like mushrooms, eggplant, beans, and lentils. “As long as the meals are spiced well, it won’t seem as though you’re missing out on anything,” she says.

“Nigerian cuisine is wonderfully diverse and big on flavour,” she adds. “It lends itself well to a vegan diet because it is so rich in plant foods that can be cooked and enjoyed in ways that do not require meat or any other animal products.”

Fatimat Adelabu, the author of the blog Je Gbese, which means “eat credit/debt” or “trouble” in Yoruba, an official language of Nigeria, says that she grew up eating many meat-heavy dishes. Goat, cow tripe, oxtail, and fish were common additions to stewed dishes. She transitioned to plant-based in 2017 after watching the documentary “What the Health” on Netflix.

“I started off watching it with a bowl of chicken and rice, by mid-way I had placed the half-eaten bowl next to me, and at the end,” says Adelabu. “I was in the kitchen bagging meats from my fridge and freezer and tossing them into my garbage can.”

She moved to New York City from Nigeria at age four and has always lived near supermarkets that carry West African produce. This is due to Nigerian, Ghanaian, Senegalese, Guinean, Beninese, and Malian immigrant communities.

“One of my favorite dishes is efo riro, stirred spinach in Yoruba,” she says. “Efo riro is largely spinach and blended stew, with seasonings like locust beans, thyme, and bouillon cubes to bring out the flavors of the stew. The addition of meat is usually to get more of the flavors of the meat to infuse with the stew.”

Adelabu is a fan of replacing meat with mushrooms as well. She also uses them to replace meat-based stock. “For stock, I boil mushrooms, bell peppers, garlic and onion with a dash of soy sauce or mushroom bouillon,” she says. This works well for jollof rice, a one-pot dish made with tomato and onion.

“Nigerian cuisine is very versatile,” she adds. “I encourage everyone to attempt to make jollof rice or efo riro to try out the different flavors of the country. If you see a dish with meat, leave it out or replace it with mushrooms.”

The Future of African Cuisine

But it’s not just Africa’s past that’s plant-based. It’s future is looking that way, too.

Like the rest of the world, meat consumption has increased across Africa. But so has a rise in vegan and vegetarian options. South African vegan meat brand Fry’s is a staple in supermarkets, offering plant-based versions of many classic dishes.

“Veganism in Nigeria is popular among the Indian-born minority and among Nigerians returning to Nigeria from abroad,” Johannes Flosbach, Head of Performance Management Group at TGI Group of Companies (Chi Farms’ parent company), told Vegconomist.

Older Nigerians are also shifting away from meat for health reasons, as meat-heavy Western diets can increase the rates of diseases including heart disease and stroke.

Rwanda is now on the brink of creating a “Silicon Valley” that’s aimed at “transforming the continent.”

The innovation destination will be located in the capital city of Kigali. It will work with domestic and foreign universities, technology companies, biotech firms, agriculture, healthcare, and financial services. Like other tech-heavy regions across the globe, this could bring more plant-based food (think Impossible Burgers or JUST vegan egg) to Africa. It could also bring another hot food tech category to the continent: lab-grown cell-based meat.

This is already happening nearby in Israel, where Future Meat Technologies is working on the world’s first pilot production facility for growing cultured meat.

Veganism is also making a name for itself in Africa’s wild, as anti-poaching rangers, including an all-female troupe called Akashinga, are vegan. The troupe is part of the International Anti-Poaching Foundation run by former Navy sniper Damien Mander.

“We need an armed component,” he told the BBC in 2018, “but we need to start moving more and more of our resources into communities, and the best people for that are women.”