In response to a new study that reveals that airport security bins are a bigger breeding ground for cold and flu-causing germs than toilets, Tulsa International Airport may soon run ads reminding customers that the health risks of meat pose an even bigger threat.

CBS reports that the study was conducted by researchers from the University of Nottingham in England and the Finnish National Institute for Health and Welfare. Samples were collected from plastic trays and toilets at Helsinki-Vantee airport during peak flu season. While researchers found an abundance of illness-causing germs in the plastic trays used at security checkpoints, none of those germs were found in airport toilets.

International animal rights nonprofit PETA (People for the Ethical Treatment of Animals) hopes to run its ads alongside Tulsa International Airport’s luggage bins. The organization notes that it has chosen Oklahoma to due its status as one of the top cow-producing states in the nation. 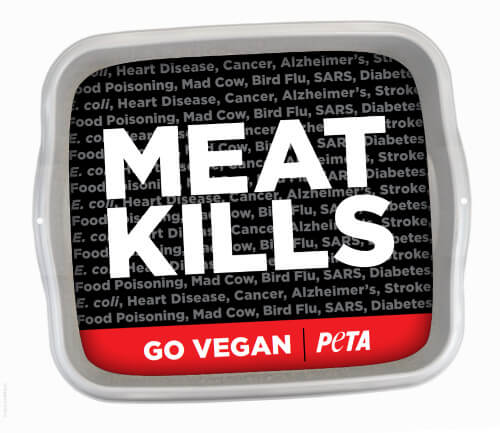 “Airport bins may be filthy, but eating meat is far more dangerous and can give you E. coli, mad cow disease, SARS, bird flu, salmonella, and other stomach-churning, potentially deadly diseases,” said PETA President Ingrid Newkirk in a statement. “PETA’s travelers’ advisory may help prevent everyone—including animals who are chopped up for meat—from suffering and dying prematurely, and it’s just the ticket for anyone thinking of going vegan.”

An extensive study released by the World Cancer Research Fund last May, which analyzed more than 51 million people, linked regular meat consumption, particularly processed meats like bacon and cold cuts, to a higher risk of colorectal, lung, stomach, and pancreatic cancer. The same study noted that ditching meat, adopting a regular exercise regime, and cutting back on sugary drinks and alcohol can reduce cancer risk by as much as 40 percent.

In some cases, the meat itself is contaminated. Forbes reports that last August, the Center for Disease Control found that Kosher chicken was the culprit for a recent Salmonella outbreak which resulted in eight hospitalizations and one death. Earlier this month, more than 130,000 tons of ground beef contaminated with E. coli were recalled from major retailers like Target, Aldi, Sam’s Club, and Albertson’s.