US-based vegan meat companies Beyond Meat and Impossible Foods are the new UN Environment’s “Champions of the Earth.”

“We’re BEYOND honored to have been recognized by the @unitednations as a ‘Champion of the Earth’ tonight!” Beyond Meat said an Instagram story.

The award was presented by actor and activist Alec Baldwin, a keen advocate for solutions to climate change and the environmental challenges our planet currently faces. He is also a vegan for health reasons, and in the past, he has teamed up with the Physicians Committee for Responsible Medicine to promote a plant-based diet of foods such as nuts, grains, fruits, and veggies, over more convenient options, like meal replacement bars.

An agency of the United Nations, the UN Environment is the leading environmental authority globally, setting the environmental agenda worldwide. Beyond Meat and Impossible Foods were recognized by the organization for their “pioneering” work in helping to build a new food system and eradicate factory farming. 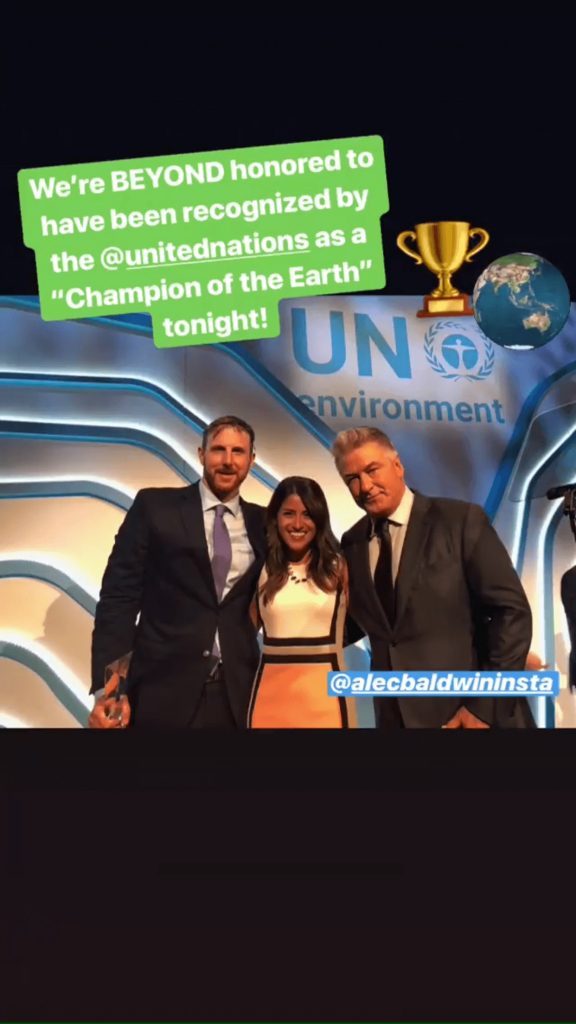 “Our use of animals as a food-production technology has brought us to the verge of catastrophe,” the UN Environment said in a press release. “The destructive impact of animal agriculture on our environment far exceeds that of any other technology on Earth.”

It continues, “The global community can eliminate the need for animals in the food system by shifting the protein at the centre of the plate to plant-based meat, say the founders. For their pioneering work towards reducing our dependence on animal-based foods, Ethan Brown and O’Reilly Brown have been selected 2018 Champions of the Earth in the category of science and innovation.”

The positive impact of vegan meat on the planet is significant. According to a recent study by Beyond Meat, a Beyond Burger patty uses 99 percent less water than a traditional 1/4 lb beef burger, 93 percent less land, produces 90 percent fewer greenhouse gases, and 46 percent less energy.

“What’s clear is that the way we produce meat today is not sustainable,” said Brown in a statement. “We are pushing limits on both natural resources and atmosphere.”

He added, “We believe that by transitioning acreage currently dedicated to animal feed into protein crops that can be used directly for human consumption in the form of meat from planets, we can bring a step-change in efficiency, much needed innovation, and sustainable economic growth to rural economies here in the US and abroad.”