A two-day, women-only vegan climbing event is set to take place later this week in the Philippines.

Reported by Rappler, a mountaineering event called “Bobay Climb” will take place in the Davao region, located on the southern Philippine island of Mindanao, and kick off in the municipality of Maco, Compostela Valley.

The climb includes an arduous trip to the active volcano Amakan, which has an eight-hectare caldera (the part of the volcano that erupts). In order to reach it, Dompor says that climbers will need to repel, a mountaineering technique used for descending steep mountain faces. The trip also includes a hike to a natural hot spring, bamboo rafting, and learning more about what the province has done to help women.“We want to mainstream this kind of activity which has been dominated by men climbers,” Dompor said.

The event aims to promote both tourism and female empowerment. The word “bobay” means “woman” in Mansaka, the language of the Lumad, a group of indigenous people living in the Southern Philippines. 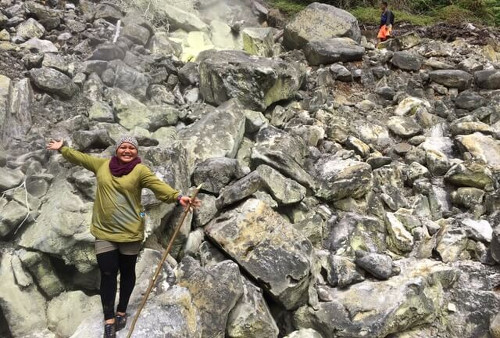 “We want to instill that women can have fun in this kind of activities,” said Christine Dompor, the province’s chief tourism officer, adding that the idea came from the female president of the Mountaineering Federation of Southern Mindanao.

Climbers will be provided with vegan meals and vegan mountain climbing snacks to power them through the trip. It’s a common misconception that animal products are necessary to provide strength and stamina to athletes, however, a recent influx in the number of athletes who have adopted a plant-based diet or vegan lifestyle are proving otherwise. Last year, 88-year-old vegan doctor Fred Distelhorst scaled Mount Kilimanjaro, becoming one of the oldest people to climb the mountain. Later that year, the Vegan Kilimanjaro Challenge for vegan mountain climbers was announced. Plant-based athletes ages 18 to 70 were invited to sign up in order to prove that a vegan diet doesn’t hinder athletic performance.

Steph Davis, a rock climber, BASE jumper, and wingsuit flyer who has been vegan since 2003, is considered to be one of the best rock climbers in the world and holds many “firsts,” such as being the first woman to summit all peaks of the Fitzroy Range in Patagonia and the first woman to free clumb Salathė Wall on El Capitan.