The first ever all-vegan Mt. Kilimanjaro expedition submitted the peak on March 1, 2018. The seventeen-member crew was sponsored by the Physician’s Committee for Responsible Medicine (PCRM) to raise funds for the Barnard Medical Center.

Fueled exclusively by plant-based foods and using vegan-friendly gear (including clothing), fourteen of the seventeen hikers made it to the top. This 82% successes rate far outpaces the average rate. Typically, only 44% of those who attempt the six-day climb make it to Uhuru Peak, Kilimanjaro’s highest peak. Further, each member made it to base camp, which is five hundred feet higher than Mt. Whitney. To put it in perspective, it took four days, hiking eight hours per day, just to reach this point. Those not affected by altitude sickness continued on to the peak, trekking through sub-freezing temperatures.

The motley crew was comprised of hikers from around the world, from eighteen to seventy years old. Several were from the United States, though participants from Europe, Canada, and Africa also joined in. Everyone was vegan, though their experiences ranged from one year to twenty-six years of cruelty-free living. Each member paid their way, but donations were encouraged to support the expansion of the Barnard Medical Center, the world’s first plant-based medical facility. 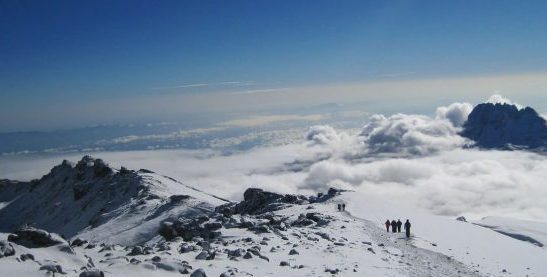 The expedition’s success demonstrates the performance benefits of a plant-based diet. Before setting out, organizer Mike Weinberg said, “Besides fulfilling personal goals, these intrepid adventurers will demonstrate to the world the heights of achievement possible on a healthy, life‑enhancing, plant‑based diet.” Weinberg documented the journey, from the planning to the climb itself, in an attempt to educate the public on the vegan-friendly nutrition and equipment used by the crew.

PCRM congratulated the hikers via a Twitter post, writing, “Congratulations and thank you to the first ever all-vegan expedition to climb Kilimanjaro! With the help of plant-based nutrition and all vegan gear, 90% of the team made it. #vegankilimanjaro #veganfit.”

According to the Facebook page, the second plant-based expedition, Kilimanjaro 2, is already in the planning stages. Though the date has yet to be announced, Weinberg encourages anyone interested to email him and join the team.