Sixty-six percent of Americans are willing to try clean meat, according to a new study released by The Good Food Institute (GFI), a nonprofit organization focused on accelerating the commercialization of vegan and slaughter-free meat.

“Before now no survey about clean meat had used accurate terminology. Also, most had not provided much if any context,” wrote GFI co-founder and executive director, Bruce Friedrich. Names such as “lab-grown meat” and “cultured meat” have previously been used by publications, however, an analysis of the terminology used showed that “clean meat” is far more popular, and accurate according to GFI, than other terms.

In order to gain an understanding of how many consumers are willing to try clean meat, GFI partnered with Faunalytics. The nonprofit organization provides access to research centered on factory farming, veganism, consumer habits, and more. The study was funded by Animal Charity Evaluators, an initiative that finds and advocates for the most effective ways of improving animals lives. 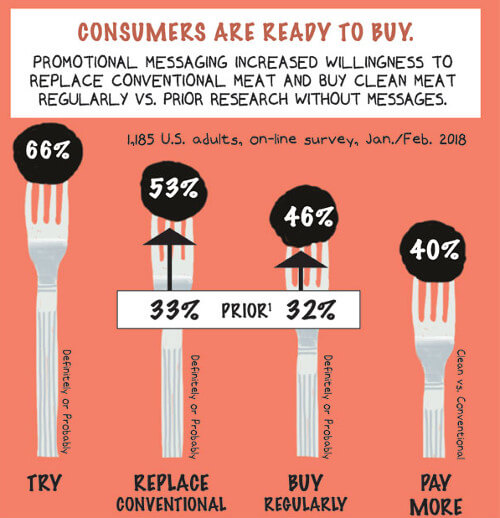 Prior to learning about how cellular agriculture can grow meat without the animal, only 25 percent of consumers believed that eating slaughter-free meat is “good.” However, once given the facts, the number grew to 64 percent. Consumers also gained an understanding of how commercialized clean meat can potentially impact the planet, with 73 percent reporting that they believe it will be more environmentally-friendly than factory-farmed meat. 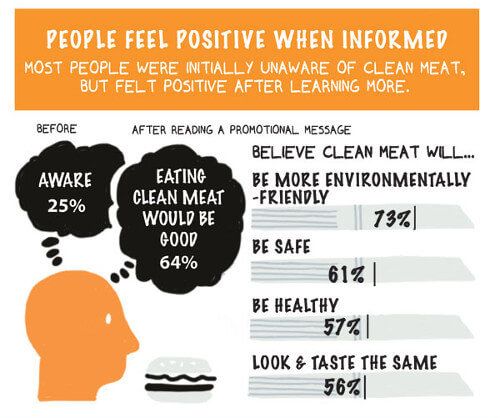 Sixty-one percent said that they think clean meat will be safe to eat, 57 percent think it will be healthier than conventional meat, and 56 percent think that it will look and taste authentic. Further, consumers who were informed about the conditions in which factory-farmed animals live said that the meat is “unnatural” and would be willing to pay more for slaughter-free meat.

Why gaining consumer insight is critical

The study comes at a critical time, as several brands are edging closer to launching clean meat to market. Josh Tetrick, CEO and founder of California-based food tech company JUST, says that its clean meat will be available to consumers by the end of the year.  Tyson Foods-backed clean meat startup Memphis Meats, which conducted a casual survey that revealed 60 percent of consumers would try clean meat, hopes to launch its clean chicken and duck meat to stores by 2021. Further, Israeli clean meat startup Future Meat Technologies, which is also backed by Tyson, is working toward bringing down the cost of production of its product.