Longtime animal rights advocate and star of NBC series “The Good Place,” Kristen Bell, has been selected to narrate the upcoming Imax original documentary, “Pandas,” which covers the plight of the wild giant panda, a species whose populations have been impacted by human intervention.

According to the World Wildlife Federation (WWF), fewer than 2,000 giant pandas remain in the wild. While the species is no longer endangered as of 2016, humans are still working to undo the damage wild populations have suffered. Habitat loss and population fragmentation due to new road construction are among the biggest problems faced by wild pandas.

Directed by David Douglas and Drew Fellman (“Born to Be Wild” and “Island of Lemurs: Madagascar”), the documentary takes viewers to the Chengdu Research Base For Giant Panda Breeding, and follows the journey of a panda cub named Qian Qian as she is raised in captivity with the goal of being released back into the wild. Hou Rong, the director of research at the facility since 1994, has raised over 200 baby pandas and hopes to help the population thrive outside of captivity.

While Bell has not been involved in the production since the beginning, she is excited to join on as narrator for the film. “I’m not un-secretive about the fact that I’m an animal lover, or an IMAX lover to be totally honest with you,” she said in a press release. 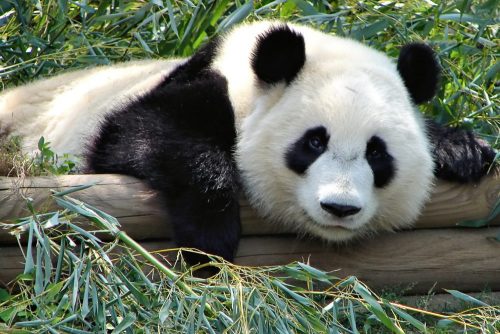 Bell believes that the new documentary will have a positive effect on audiences: “It’s inspiring the next crop of biologists and conservationists,” she said. “It’s inspiring, it’s beautiful, it’s adorable, it’s educational and personally I think currently the world could use more things that feel good, you know?”

A vegetarian since age 11, Bell has long been an ally of animals, an advocate of fostering shelter pets, and has previously partnered with HSUS (Humane Society of the United States) to raise money for special needs pets.

In addition to the efforts of conservation experts, a 2017 report released by the WWF called “Appetite For Destruction” suggests that a plant-based diet may be one of the key factors in preventing many endangered species from going extinct. The Yangtze, which is home to some wild panda populations, was listed as one of the vulnerable regions that have been impacted by animal agriculture.

The documentary is set to play in select Imax theaters starting April 6.