New York’s Fashion Week: Men’s is right around the corner. For an event that will likely see countless animal products modeled to a room full of applause, those attending this year’s shows will be given something else to consider.

The “massive billboard” has been placed “just around the corner from where the [Fashion Week] shows will take place”, PETA revealed. The advertisement has also strategically been positioned within a mile of the Fashion Institute of Technology, the New York School of Design, and the Parsons School of Design.

Learning about the reality of how wool is obtained is what inspired Phoenix to ditch the animal product. 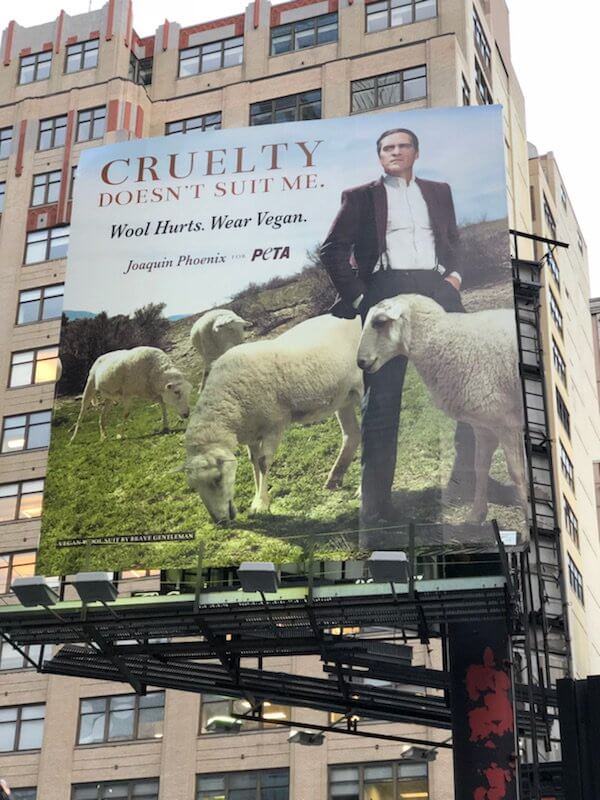 “When PETA sent me that video of this undercover investigation of what happened in these shearing farms, that was really eye-opening”. He also commented on how incredibly “violent” the environment is.“[T]he only option is to not use wool. That’s become abundantly clear.”

Phoenix isn’t the first celebrity to speak out about the wool industry. Actress and author Alicia Silverstone was also featured in an anti-wool campaign late last year.

Fortunately, fashion-lovers don’t have to go without the look. Innovative designers have developed vegan knitwear, which mimics the experience of wool without the harm placed on animals or the environment.

“I think wool is something we don’t think about a lot. You can’t imagine until you see the level of abuse that happens. After seeing this footage it’s a trade I certainly don’t feel comfortable being involved with,” Phoenix said.

“There are alternatives that are cruelty-free but still stylish.”