In a recent interview with fan site The Arnold Fans, the former governor of California explained what it was like working with Miller and Cameron for the sequel.

“It was a very interesting film to do with Tim, the dynamic, between him and with Jim Cameron producing,” he said. “So Jim Cameron is right now directing Avatar films so he’s taken on this enormous challenge and he’s very busy with that BUT he’s a control freak and as you know, Terminator is kind of his baby so he does get involved in the filming so there were interesting discussions about which direction to go with a certain scene or how the dialogue should finish or what the certain look should be of an individual and all that stuff so there was a big collaboration between Jim and Tim Miller. I feel it was in good hands with both of them.”

Details on the sixth installment in the Terminator franchise are scarce, but at this moment it’s known that the film will be a direct sequel to 1991’s “Terminator 2.” Schwarzenegger will reprise his role as the titular T-800 Model 101. Linda Hamilton will return for her role as series protagonist Sarah Connor. The film is directed by “Deadpool” director Tim Miller and produced by Cameron.

According to the Terminator himself, the film’s budget was between $160 and $200 million and visual effects are still being made. “I’ve seen 15 minutes and it looked great and I was very excited about it,” he said. The film is currently slated to release in November 2019.

What Does Sci-Fi Say About the Future of Food?

There’s a recurring pattern in the realm of science fiction. Whether you’re looking at an idealistic future like in the “Star Trek” franchise or the flooded earth of the 1995 Kevin Coster-led “Water World,” the worlds these stores take place in carry a vegan message.

Film isn’t alone in tackling the future of food – sci-fi literature has predicted on numerous accounts how the way we eat may change as far back as the late 1800s. In the 1897 novel “Two Planets” by Kurd Lasswitz, people dine on “synthetic meat.” Robert Heinlen’s 1950 book “Farmer in the Sky” takes place in a future where the earth is overpopulated and Jupiter’s moon is being terraformed. Instead of meat, agriculture is the focus and people eat “Syntho-Steaks.”

In William Gibson’s 1984 cyperpunk novel “Neuromancer,” people eat “Vat Grown Meat” – an analog to real-world clean meat. In Margaret Atwood’s 2003 novel “Oryx and Crake,” the world overpopulated and overrun with genetically-modified domestic animals. Her idea of lab-grown chicken is gruesome: “What they were looking at was a large bulblike object that seemed to be covered with stippled whitish-yellow skin. Out of it came twenty thick fleshy tubes, and at the end of each tube another bulb was growing.”

But first, was the world of the Terminator vegan? The Terminator – sent back in time from the year 2029 to kill Sarah Connor – is made from a material called living tissue. Developed by the self-aware AI (artificial intelligence) Skynet, living tissue allows Terminators to live, breath, sweat, bleed, heal, and age. Eating is a bit inconsistent – in one episode of the “Sarah Connor Chronicles” TV show, one machine is able to survive without food or water for over 40 years. In another episode, a Terminator played by “Firefly” actor Summer Glau eats pizza and pancakes. 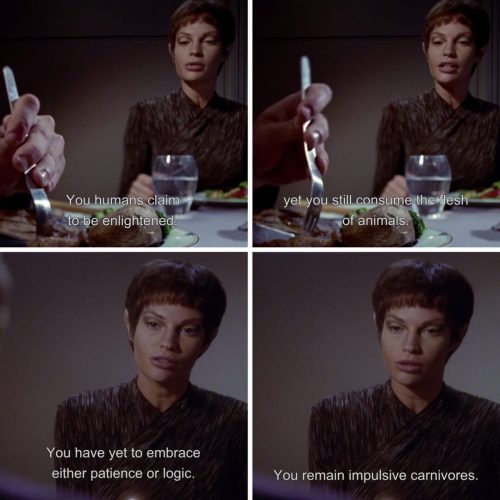 In the Star Trek universe, you don’t need to harm animals to eat meat, milk, fish, and eggs. Everything is made via a machine called a “replicator,” which synthesizes food on demand. This sometimes means that people ask the machine to make a steak out of thin air, but no animals are harmed in the process.

The universe isn’t completely vegan – the Klingon race are known meat-eaters and in some series, humans eat real animal products – but there it’s not without push-back.

The image above, taken from the first episode of “Star Trek Enterprise,” shows a Vulcan questioning the ethics of eating meat. The race has been vegetarian since the original series – Spock even once lamented the fact that he had eaten replicated meat in one episode.

In “Star Trek: The Next Generation” (TNG), Captain William T. Riker, Captain Jean-Luc Picard’s righthand man, explains to Badar N’D’D – a member of the anthropomorphic canine Antican race – “We no longer enslave animals for food purposes … You’ve seen something as fresh and tasty as meat, but inorganically materialized, out of patterns used by our transporters.” 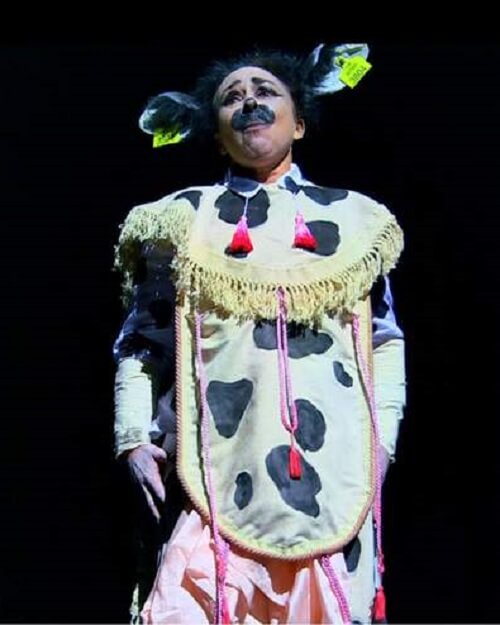 Comedian Simon Amstell’s 2017 sci-fi mockumentary “Carnage” takes place in a world where using animals for food is a thing of the past.

Set in the year 2067, the film alternates between the future, where younger generations are shocked that people used to eat animals and there are emotional support groups for former omnivores, and events of the past that led to a vegan future. “Carnage” makes use of both real and fictional events, showing the likes of chef Gordon Ramsay – who is increasingly supportive of plant-based food – promoting meat-eating in 2017.

It also shows the UN advising people to eat fewer animal products to combat climate change, which is actually happening right now. “Our use of animals as a food-production technology has brought us to the verge of catastrophe,” the organization said last October. Earlier this month, it called the standard English diet “unviable“ due to the heavy use of meat, eggs, and dairy.

Warnings are ignored, the UK floods, faces a Super Swine Flu, factory farming is banned, and the world shifts toward a plant-based diet.

The Dark Side of the Future

Climate change isn’t really a thing in the Star Trek universe, but there are a few mentions. In the Hugo Award-winning episode of TNG “The Inner Light,” Picard is struck unconscious by an alien energy beam. In his mind, he lives for 40 years through the mind of a scientist living on a planet threatened by climate change-driven aridification. It eventually threatens all life on the planet, but the scientist’s memory lives on through Picard.

More often than not, sci-fi films and literature have a more dismal outlook on the future. 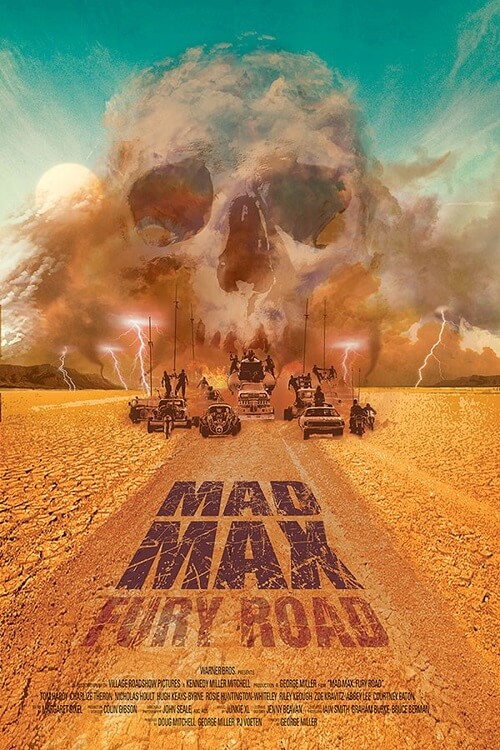 “Fury Road” takes places following an energy crisis that, like the previous films, makes resources scarce. Much of the world is a desert and towns have essentially become fortresses designed to protect commodities: there’s Bullet Town, Gas Farm, and the Citadel ruled by the tyrannical Immortan Joe, which hoards water.

In an early scene, the dictator gives water to the poor and quickly takes it away, warning, “Do not become addicted to water, it will take hold of you and you will resent its absence.”

Climate change-caused water scarcity is a reality – and “Fury Road” shows sci-fi shades of what the world may become. According to the UN, “Low-income communities, who are already the most vulnerable to any threats to water supply are likely to be worst affected. More floods and severe droughts are predicted. Changes in water availability will also impact health and food security and have already proven to trigger refugee dynamics and political instability.”

“Fury Road” doesn’t only draw parallels to climate change, but also the exploitation of living beings for the benefit of an elite class. At the beginning of the film, the titular Max is captured by Joe’s War Boys, a gang of men promised salvation in exchange for kamikaze-style loyalty, and brought back to the Citadel. There, he is immobilized and made into a “blood bag” – a blood donor – to a War Boy.

The War Boys are the sons of Immortan Joe’s wives who are more or less forced into the position to be used as baby-making machines to grow an army. Another group of women in the Citadel spend their lives with milking machines attached to their breasts to produce “Mother’s Milk” – a source of food for Immortan Joe and the wealthy elite. 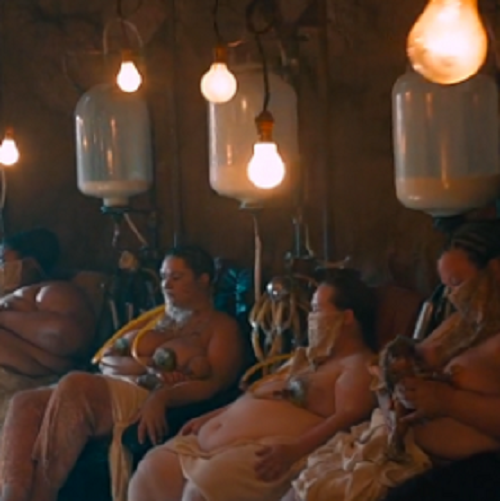 Instead of their own children, women forced to produce milk are given dolls, echoing the reality of how mother cows have their babies taken from them shortly after birth so humans can drink their milk. 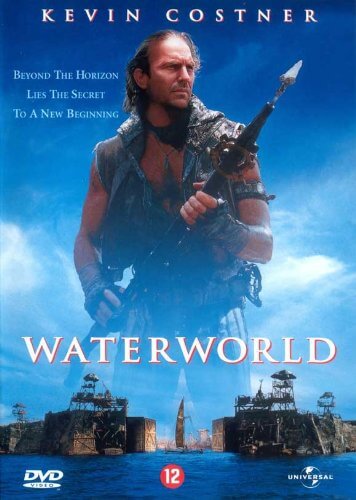 “Waterworld,” directed by Kevin Reynolds is “Fury Road’s” opposite, but it paints an imaginative portrait of what the world might become. Set in the distant future, the polar ice caps have melted and “Dryland,” as it’s called in the film, is a memory of the past. It’s not much of a stretch to say that melting ice caps may change our way of life – and it’s already in the process of happening, according to NOAA.

“One of the starkest effects of climate change is the anticipated rise in sea level worldwide,” says the Union of Concerned Scientists. “This occurs for two main reasons – the expansion of the ocean as it warms, and the increased melt from ice sheets, ice caps and glaciers. Along with alarming threats to coastal communities, infrastructure, economies and ecosystems, this rise has implications for available freshwater, as rising sea levels drive saltwater into freshwater aquifers.”

For the most part, humans spend their lives on floating atolls. Costner plays the Mariner, a wandering ronin of sorts who sells dirt, which has become a precious commodity, for a living. Much of the film is spent searching for the mythological Dryland. 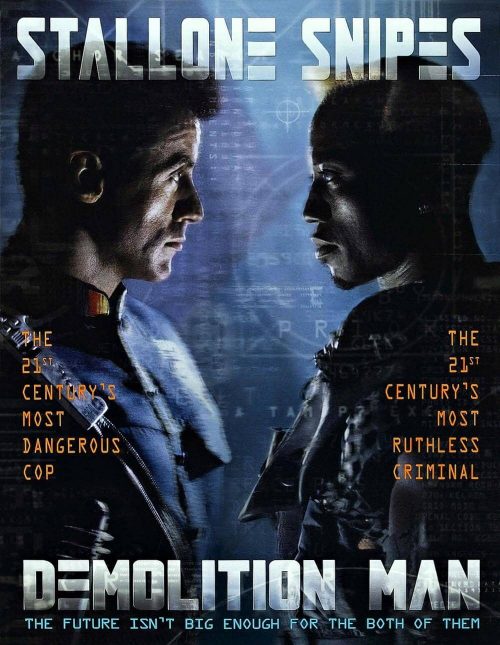 “Demolition Man” is a 1993 sci-fi film set in of 2032.  Sylvester Stallone plays LAPD Sergent John Spartan, anti-hero to Wesley Snipes’ villainous gang lord Simon Phoenix. The pair are cryogenically frozen in the year 1996 to awaken in to a dystopic, not-too-distant future, were LA, Los Angeles, and Santa Barbara have merged into the city of San Angeles.

Taco Bell is the sole survivor of an event known as the “Franchise Wars,” and meat isn’t on the menu. Upper class customers dine on deconstructed, plant-based tacos. Meat – albeit rat meat – is a food left for the lower class, raising questions of how food accessibility will be transformed by climate change.