The vegan-friendly themed crumpets are apparently part of a trend with Asda; ghost-shaped crumpets on Halloween, Christmas-tree shaped in December, and – if the grocery store brings them back – bunny-shaped crumpets for Easter. The company Lakeland Bake provides Asda with its crumpets, according to the website.

Valentine’s Day Treats in the UK 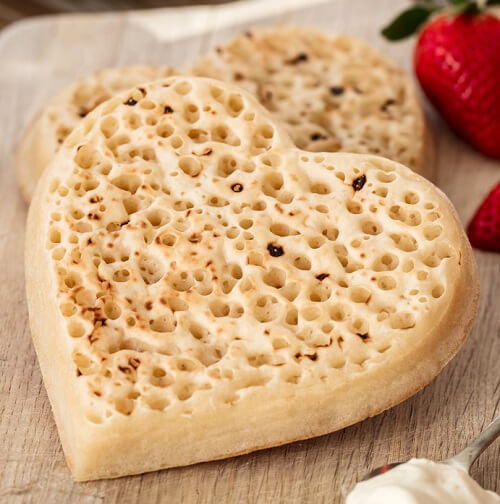 If you’re looking for more ways to celebrate Valentine’s Day, Asda also carries pink gin, which according to Barnivore, does not use carmine – an ingredient derived from cochineal insects – making it vegan. Asda also recently launched sparkling pink gin.

Tesco, the nation’s biggest supermarket, sells vegan red velvet brownies from Wicked Kitchen, which sound like a good choice for a Galentine’s or Valentine’s Day celebration. Morrisons stocked the same vegan heart-shaped crumpets as Asda last year, but the treat hasn’t been spotted yet – however, Lakeland Bakers still lists it on the “stockists” section of its website.

High street chain Marks & Spencer – which was recently awarded for its vegan options – will offer its first ever plant-based Valentine’s Day dinner this year. The £20 dinner consists of a starter, main, side, dessert, chocolate, and a bottle of wine. Options include sweet potato falafel, mushroom stroganoff, frites, and roasted carrots and parsnips. For wine, you can pick from white, red, or rosé. M&S will also offer an alcohol-free beverage option.

Outside of supermarkets, London’s Crosstown Doughnuts is offering three vegan flavors – strawberry and rosé, miso caramel and banana, and crème brûlée – at all locations.

If you’re outside of the UK and missing out on the loved-up launches, vegan-friendly brand Oreo is selling Valentine’s Day cookies (you can buy them online).

A four-pack of Asda’s vegan heart-shaped crumpets cost £1.00. They are available online or in store.