Manufacturers of famous Menorcan-style sandals, Avarcas USA, has debuted their first line of vegan shoes. The new sandals are made using vegan leather.

“The new collection reflects some of the changes we’re making at home such as introducing a plant-based diet and being more ecologically responsible,” co-founder Noelia Pahissa told VegNews. “In addition, we saw a demand for vegan avarcas in the US market.”

Husband and wife team Jose Fuentes and Noelia Pahissa co-founded the Avarcas USA label. They work exclusively with PONS, a family-run business based in Ciutadella in Menorca, who has been specializing in manufacturing traditional avarcas since 1945. Each generation of the Pons family has proudly continued the family tradition. Every shoe is handmade, and all materials are sourced from Spain.

The new vegan Avarcas come in four neutral, earthy colors – black, brown, grey and taupe — and can be bought online and from various stores across the United States. 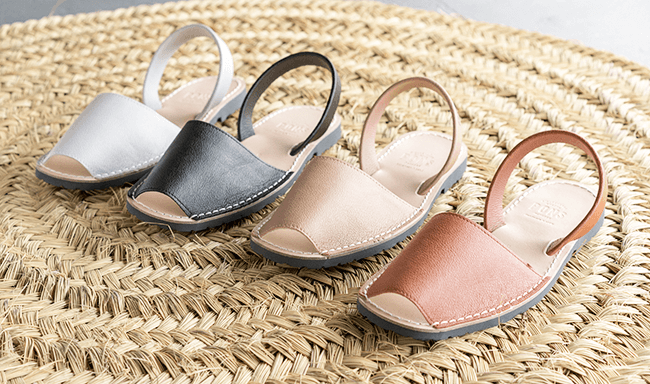 Pahissa said to VegNews that “this is the beginning of something big” in relation to the vegan shoe line, and is planning to launch more products in the future, including handbags.

The vegan shoe industry has been booming of late, with many brands launching a vegan range. Birkenstock recently expanded their award-winning vegan shoe collection and Vancouver-based Native Shoes launched a new line of zero-waste vegan slip-on shoes. In February, world-renowned Kat Von D finally announced that her 100% vegan shoe line will be available sometime this year. “I have done loads of research and have discovered beautiful, innovative, and sustainable fabrics,” she wrote.

All these new releases come as no shock, as it was announced last year that the vegan leather market is predicted to be worth $85 billion by 2025. Also, plant-based textiles have proved to be more affordable, compared to animal-derived leathers. Veerah, a luxury vegan shoe brand, launched a new line of heels made from apple peels last year.