Following on from the recent UK plans to scrap petrol and diesel cars from 2040 there is yet more ‘flying away’ from the main cause of global warming.

A recent United Nations report raised concerns that the global aviation sector could consume up to 27% of the world’s carbon budget by 2050. The report made clear that even given the best possible circumstances, airplanes will emit 12% of the world’s carbon emissions mid-century if the world will be able to limit climate change to a minor 1.5°C.

This came as a result of global aviation and travel groups – such as the International Air Transport Association (IATA) – agreeing to cap emissions. For example, the IATA has pledged to lower carbon dioxide emissions 50% by 2050 from 2005 levels.

But the UN’s International Civil Aviation Authority (ICAO) says such efforts are insufficient. Their belief is that these goals will not improve the situation sufficiently because of the number of people worldwide who will fly overseas is expected to surge. While currently an estimated 18% of people have flown on a plane, the world’s middle-class is growing, plus more discounted carriers are emerging, thus airplane travel is and will continue to become relatively affordable.

However, although this is clearly a concern for global emissions, air travel is not a main cause of global warming. In 2016 it was determined that farming is the single biggest cause of the worst air pollution in Europe, as nitrogen compounds from fertilisers and animal waste drift over industrial regions. Livestock is responsible for 65% of nitrous oxide emissions, a GHG 296 times the global warming potential of carbon dioxide, and which stays in the atmosphere for 150 years. It is animal agriculture, not aviation, which is the true perpetrator of global warming.

Worse, emissions for agriculture are projected to increase 80% by 2050.

The statistics concerning animal agriculture utterly overshadow the impact of aviation, and cause question as to why more attention is not being given to tackling this main cause of global warming.

Some analysts have commented that the only way to solve the aviation sector’s emissions rise is to curb its growth. For example, last year, an assessment of the price of a new runway at London’s Heathrow Airport revealed that its costs behind ensuring the United Kingdom stayed compliant with legally binding climate change goals meant discount carriers would no longer be able to fly from that airport. Triple Pundit reported further that citizens in cities such as Barcelona and Venice have begun to push back against unchecked tourism, and commented that this “pos[ed] a difficult question for local politicians: can governments limit the number of people coming to their cities and countries in the name of sustainable development?”

But, a more relevant question which should be being asked is, when will governments and key environmental decision-makers finally acknowledge that animal agriculture is the main cause of global warming? Will they ever? 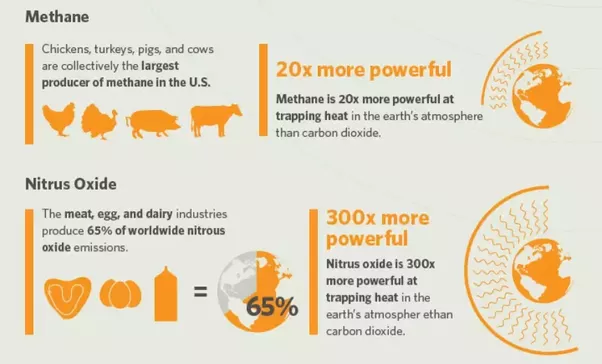 While concern has been voiced regarding the growth of aviation travel, the past decades’ increased consumption of animal products has been largely ignored. Studies examining how human eating patterns have shifted over time found that a rise in fat and meat consumption has elevated humans in the food chain, bringing us closer to predators like polar bears, and that this has adverse impacts on ecosystems. Likewise, a remarkable change in the omega balance of our diets has been linked to the decision to increase meat production by feeding corn and soybeans to immobilised cattle, pigs, and poultry instead of letting them graze on the grass that has been their natural diet for fifty million years.

While it is indeed a positive step for environmentalists that recognition is being given to the need to combat global warming, it remains frustrating that the most damaging cause is not being combated. Reducing air travel, which could account for 25% of global warming by 2050, is helpful, but given that already animal agriculture contributes significantly more to climate change – and reducing methane emissions would create tangible benefits almost immediately – global warming decision makers are failing to prioritise their concerns.