On July 9, fast-food giant A&W launched the vegan Beyond Burger in nearly 1,000 of its Canadian locations. The response was overwhelmingly positive, with some stores simply unable to keep up with the demand.

A&W’s Main St. Science World location posted a notice on the door stating, “we’re so sorry, our Beyond Burgers are so in demand that we ran out of stock.” The story was the same for many other locations across the country, and some even found themselves having to ask other stores to share some of their stock. In the interest of not losing any customers, the notice continued, “for the meantime, please ask any of our hosts for the 50% off Beyond Burger coupon that you can use once we have them back in stock tomorrow morning.”

The popularity of the meaty plant-based “bleeding” burger was predicted at its prelaunch party, held several weeks ago. Chef and award-winning restaurant owner Craig Wong said at the event, “I love this burger. Fantastic flavor and beautiful texture. It’s got a nice reary texture…[eating it] was a really nice experience.” Youtuber Nikole, of HealthNut Nutrition, added, “It was delicious. Like hands down my like go-to burger.” 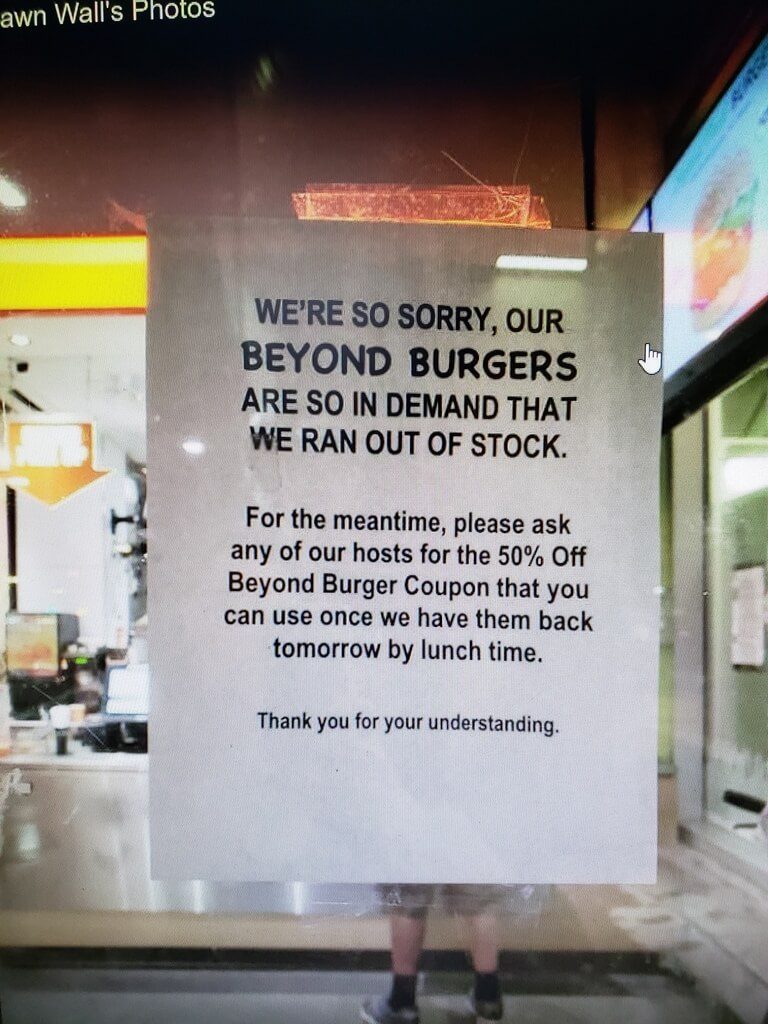 The partnership with A&W is Beyond Meat’s biggest so far — the fast-food company is the second largest burger chain in Canada. Ethan Brown, CEO of Beyond Meat, recently spoke to Forbes about the new collaboration. “We’ve always focused on making this product available to the largest number of people irrespective of socioeconomic status or geographic location,” he explained. “We want to be available in as many places as possible. Being in A&W Canada puts us a step closer to that goal.”

Beyond Meat is on a mission to go global. In May, it was announced that the vegan company had partnered with distributors across Europe, UAE, Taiwan, South Africa, Canada, and Mexico, after selling more than 11 million of the burger since its initial launch back in 2016. “Reflecting rapid demand growth in the United States and sustained interest from international markets, we’ve taken steps to significantly increase our production capacity,” Brown said in a statement.