Major fast-food chain A&W recently announced the vegan Beyond Burger will be on the menu at 925 Canadian locations beginning on July 9. The burger was debuted at a pre-launch event and proved to be a hit, even with meat-eaters.

The launch ceremony took place at an A&W branch in Toronto. The event was star-studded; the CEOs of A&W and Beyond Meat, Susan Senegal and Ethan Brown respectively, were present, along with dozens of high-profile names. Attendees, both vegan and self-confessed meat-lovers, were able to get a taste of the meat-free meat at an A&W food truck outside the branch.

Hot for Food‘s chief food creator Lauren Toyota hosted the event, which she noted was an informal affair with an open discussion between the guests and the CEOs. 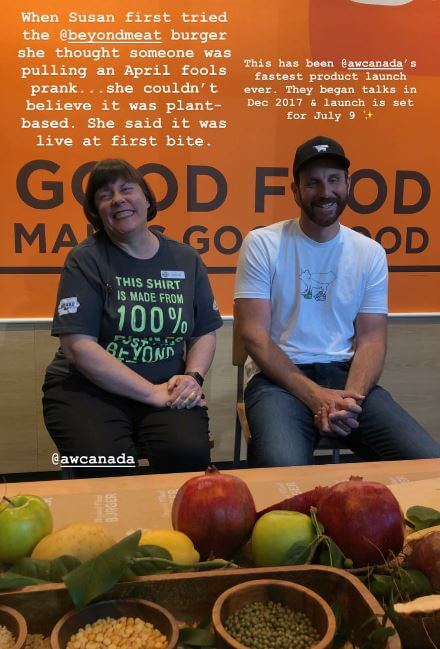 Alongside Toyota, vegan blogger and social media star Edgy Veg documented the event on her Instagram story. Meanwhile, vegan reporter Erin Ireland captured reactions of many attendees, all of whom were overwhelmed by the taste and texture’s likeness to conventional meat. Ireland noted A&W’s Beyond Burger comes with mayonnaise, making it a vegetarian menu option, but she suggests swapping the mayonnaise for mustard to make it vegan.

Craig Wong, chef and owner of Patois Toronto, a restaurant that won an award for its juicy jerk meat, shared his sentiment for the “bleeding” Beyond Burger. “I love this burger. Fantastic flavor and beautiful texture. It’s got a nice reary texture… [eating it] was a really nice experience,” he told Ireland.

Epic breaking news out of Toronto tonight! As of July 9th, all @awcanada’s 925 locations across Canada will serve the A&W @beyondmeat burger, making plant-based options accessible to everyone!!! This is a game changer. Got to try it tonight with a panel of taste testers including @laurentoyota @edgyveg and @mdzofficial and we all agreed it’s seriously ?? Also amazing to meet @beyondmeat CEO, founder and visionary Ethan Brown who says (and proves), “You don’t need animals to make meat.” Amen! See more from tonight’s event in stories ??

Nikole, from YouTube channel HealthNut Nutrition, commented, “Being a meat-eater, even though I don’t really like beef, it was so good.” She added, “I was saying that it was like melt in your mouth but still has texture. It was delicious. Like hands down my like go-to burger.”

The event also featured a table of every plant-based ingredient that goes into the Beyond Burger, such as pea protein and canola oil. Brown noted that “you don’t need animals to make meat.” According to Ireland, he later mentioned it has been his dream to create a company like Beyond Meat since childhood.