Now you can use cutlery and eat it, too. Edible vegan cutlery that tastes like crackers and bread is a thing, and 10,000 are made per day.

Back in 2005, entrepreneur Narayana Peesapaty had a career-changing moment that now has the potential to cut millions of tonnes of single-use plastic waste every year. Peesapaty was visiting the fields of Mahabubnagar in India’s city of Telangana – a district prone to droughts. At the time, he was working on procuring a solution to intensive water use in rice farming and plastic pollution throughout the district.

When dining for lunch, his jowar roti (a bread made from millet) arrived cold and hardened. “I had to break the roti and scoop the dal and curry with its pieces, crunching into them. That was the eureka moment,” Peesapaty told news outlet Straits Times. Following the experience, he founded his company Bakeys, which makes edible vegan cutlery with jowar flour, paying homage to the idea’s roots. It also uses rice and wheat flour. 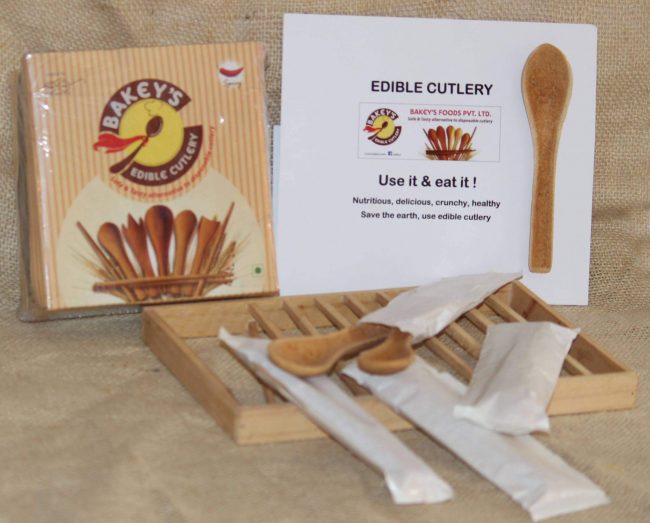 The edible cutlery — that is also fully degradable should one choose not to eat it — is offered in three flavours: savoury (complete with spice sub-options), sweet (including vanilla and strawberry flavor) and plain, to meet a range of cuisine occasions. According to Peesapaty’s wife, Pragyna Keskar, the spoons are entirely safe to eat and “taste like crackers.” Although breadlike tones can be expected as the composition of ingredients is very similar to dried-out bread.

Peesapaty noted his company’s development was not easy but he did not give up hope of leaving a sustainable legacy and creating a cleaner world. To fund the business, Peesapaty and Keskar sold their assets, received a bank loan, launched a Kickstarter crowdfunding campaign as well as a Ketto campaign, earning them a total of 41,100,000 rupees (just under $604,000). Now, each spoon costs just four rupees to produce. Since September 2016, the company has produced and sold 2.25 million edible spoons and forks. Bakeys’ animal product-free factory near Hyderabad now makes 10,000 pieces of edible cutlery per day.

A press release by the United Nations Environment Program, released last month, said 89 percent of all plastic waste in the ocean is single-use. “Finding plastic this deep in the ocean reveals the devastating link between human activity on land and the consequences from marine life below water,” it noted. With sustainable innovative products, such as Bakeys’ edible cutlery, these alarming figures may soon be improved.