Ice cream giant, Ben & Jerry’s, is hosting vegan ice cream tasting events in scoop shops across the U.S. this summer. Customers will get a chance to try the brands’ nine non-dairy, almond milk based flavors, including its brand new vegan offerings: Cinnamon Buns and Peanut Butter Half Baked.

Events have already been held in New York, Seattle, and Philadelphia; however, at the end of this month, its San Francisco’s turn, and Los Angeles, Boston, and Washington DC will follow shortly after.

“Calling all frozen dessert fans: you’re invited to dig into our entire lineup of euphoric Non-Dairy flavors!” the San Francisco event description reads. “We’ll be sampling every one of our Certified Vegan, almond milk-based flavors on Wednesday, May 30th. Join us at our Jefferson Street Scoop Shop to try all of the flavors for free!” the company announced.

“Ben & Jerry’s is excited to take its non-dairy flavors on tour to select cities with the most non-dairy fans around the US,” said Chris Rivard, who helped to develop Ben & Jerry’s vegan flavors, to VegNews. “We want to show our non-dairy fans that we love them as much as they love us.” 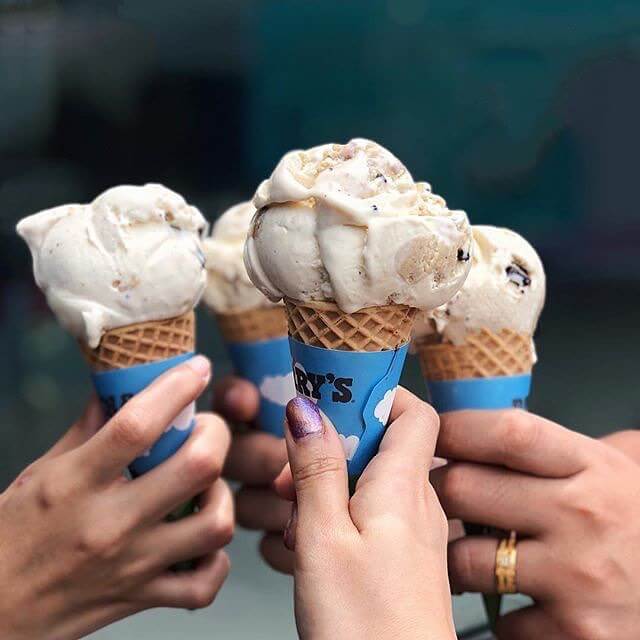 What’s more, this weekend vegan Ben & Jerry’s flavors will be making an appearance at New York’s “Scooper Bowl,” a 3-day-event where guests will be able to get their hands on the non-dairy Caramel Almond Brittle flavor. Haagen Dazs will also be at the event, with an all-you-can-eat vegan Chocolate Salted Fudge Truffle option.

20 percent of Ben & Jerry’s offerings are now vegan. “[The company has] been very pleased with this product line and the fans’ response and excitement around the offering,”  brand manager, Neila Horikawa, told VegNews at the beginning of the year. But it’s not just Ben & Jerry’s ramping up the non-dairy ice cream options. Around the world, the market is booming. In November, a report by Future Market predicted the global plant-based ice cream industry is set to be worth $2.45 billion within the next decade.

Oatly and Whole Foods are the latest companies to announce new lines of vegan ice cream. Swedish brand Oatly announced five new flavors earlier this month, and Whole Foods in the U.S. has launched its own line of almond-based ice cream as part of its 365 Everyday Value range, currently available in the Los Angeles and Orange County areas.