American plant-based protein company Beyond Meat hasn’t even launched its vegan “bleeding” Beyond Burger across Europe yet and the reaction is already “overwhelming,” says the company. Since launching in May 2016, the realistic plant-based patty has become available in 25,000 locations worldwide.

Before the end of this year, the Beyond Burger will be available across the European continent, following its soft launch in a few select stores. UK burger chain Honest Burgers trialled the burger on its London menu in the summer, and it performed so well that it will now be rolled out nationwide. The Beyond Burger has seen huge success in the US, where it is available at major supermarkets like Whole Foods Market, Sprouts, Publix, Weis, and ACME. Additionally, it is offered in more than 12,000 restaurants — including A&W Canada —  as well as stadiums and school cafeterias.

According to Chuck Muth, the brand’s chief growth officer, Beyond Meat has an existing European audience of millennials and flexitarians eager, ready, and waiting.

Speaking to Food Navigator at the international food exhibition SIAL in Paris, Muth said, “We have a huge social media fan base here already waiting for our products and [at] this show, a lot of people have come up and talked to us about it.” He continued, “We think that Europe will be a very receptive market for a high-quality plant-based product that is very much on trend with millennials and people looking to reduce their meat consumption.” 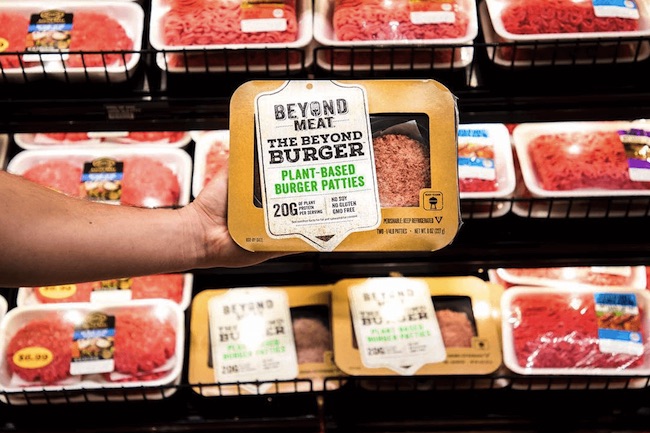 Around the world, consumers are looking to vegan meat products to replace traditional meat as they become more conscious of their health, animal welfare, and the environment. Beyond Meat has already won major points for sustainability, in particular, after it was crowned the United Nations “Champion of the Earth” alongside fellow plant-based meat company Impossible Foods.

“The global community can eliminate the need for animals in the food system by shifting the protein at the center of the plate to plant-based meat,” noted the UN Environment. “For their pioneering work towards reducing our dependence on animal-based foods, [Beyond Meat and Impossible Foods] have been selected 2018 Champions of the Earth in the category of science and innovation.”

To help roll out their award-winning product across Europe, Beyond Meat partnered with major German poultry company Weisenhof as well as Dutch meat brand Zandbergen. Beyond Meat believes that in order to create change within the food industry, it must work alongside meat producers. Its products are even sold in the meat counter alongside animal-based foods in a bid to catch the eye of the omnivorous consumer. And the technique has paid off. Since its debut in the U.S., the brand has sold more than 11 million burgers.

Beyond Meat estimates its products will perform well across Europe, however, it expects to see high sales figures from the UK, Germany, the Netherlands, and Scandinavian regions in particular.