Beyond Meat, the Southern Calif.-based vegan food manufacturer reputed for creating ‘bleeding meat’ made from plants is now expanding into a new facility, enabling increased productivity and cutting the time needed to develop a whole host of vegan meats including plant-based versions of bacon, steak, pork, chicken. The new facility will also help the company to finalize its recently-launched sausages.

Ethan Brown, CEO of the company told the LA Times: “[t]here’s a lot of people who have created meat analogues out of soy that loosely mimics the experience of meat, but we really want to look at this in a more fundamental way, and we want to be the first people who build a piece of meat perfectly from plants.” The company is well on its way to achieving just that, with many faithful devotees of the company’s Beyond Burger.

In a press release, Beyond Meat disclosed it is adding an additional 26,000 square feet of R&D space to put all of the team’s researchers in one place and increase their equipment inventory. In doing so, Beyond Meat anticipates it will drastically reduce the time it would usually take to develop a new product and bring it to the market. 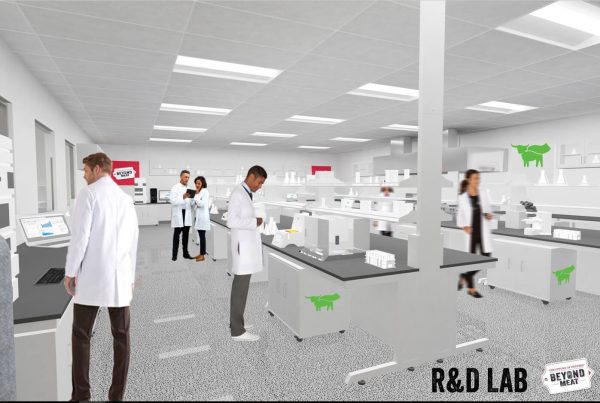 Dr. Dariush Ajami, who leads Research and Development at Beyond Meat said “[w]e are leaving no stone unturned in our efforts to perfectly build meat directly from plant materials, using only natural ingredients and without genetic modification. The breadth of processes and technologies we are bringing in-house supports the company’s focus on rapid innovation, in some cases reducing timelines by half”.

Currently Beyond Meat employs over 150 staff, which is expected to increase to around 200 with the new and improved facility. Included in the new El Segundo location will be a “cutting-edge gourmet kitchen”, for chefs and culinary experts and a “formal sensory space”, for consumer testing and feedback panels.