A new billboard is urging Chicago residents to boycott the fashion brand Canada Goose, which is notorious for its coyote fur-trimmed and goose feather stuffed jackets.

The ad, created by animal rights group PETA, is located near the retailer’s flagship store in Chicago, and shows an image of a goose alongside the words: “I’m a living being, not jacket filling.” It then urges consumers to “boycott Canada Goose.”

In a statement, PETA said the billboard kicks off their anti-Canada Goose campaign ahead of its fall and winter lines. Christina Sewell, PETA Manager of Clothing Campaigns, explains, “no jacket is worth the pain and suffering of geese.” The group previously exposed the treatment of the animals at the Canada Goose down supplier, revealing worker abuse of the distressed animals, the cramped cages geese are kept in, and their deaths, which often involve suffocation, electrocution, or being bludgeoned to death.

PETA’s billboard is therefore part of the group’s plan to “up the ante” against the fashion brand until it agrees to drop both feathers and fur. With so many cruelty-free alternatives available, there is no reason to exploit animals in the name of fashion, PETA notes. It points to the plethora of top brands, including HoodLamb, The North Face, Helly Hansen, Save the Duck, and Wuxly Movement, which all “sell warm, stylish, cruelty-free coats that no animal had to suffer and die for.” 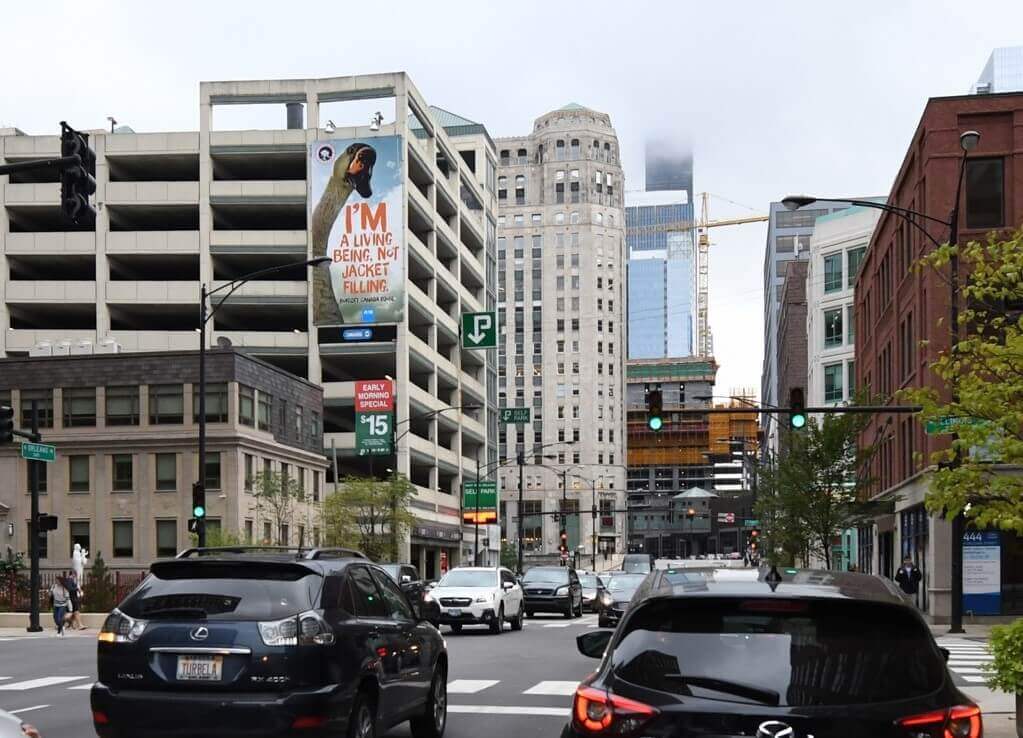 The billboard will remain in place through the end of the month, and comes at a time when wearing animals is increasingly seen as no longer cat-walk worthy.