For a recent school bake sale, an anon-mom used her own breast  milk to make brownies in place of cow’s milk and the reaction has unsurprisingly been of total disgust.

Being unable to get to a store to buy milk produced by a cow, this brownie-baking mom decided to just use milk that she produced herself. However, when other parents found out about her secret ingredient, they were both repulsed and furious.

Turning to Facebook, brownie-mom posted an appeal for advice on why other parents were so outraged at her use of this unconventional ingredient, and the post ended up going viral, generating an overall quite mixed response.

With this recent scandal in mind, one might begin to wonder – How is breast milk from a human any different to milk produced by cows? Surely human milk would be better suited for us humans than the milk of an entirely different species?

The composition of milk differentiates from species to species because milk needs to provide the adequate fuel to enable growth and development of that particular species’ young. Consequently, human milk is designed for human babies and cow milk is designed for calfs. What this means is that milk produced by a human is far more suited for human consumption when compared to cow milk.

In fact, the most commonly accepted and distributed nutritional advice is that humans and infants under the age of one should not consume non-human milk due to research indicating  major differences in the fluid’s composition. This strongly advice is recommended in the UK (Department of Health, 1994), the US (American Academy of Pediatrics, 1992), Denmark (The National Board of Health, Denmark, 1998) Canada (Canadian Paediatric Society, 1998), Sweden (Axelsson et al., 1999) and New Zealand (Soh et al., 2004).

The relative amount of protein, carbohydrates, fat, vitamins, minerals and other nutrients are very different between cow milk and human milk however they both share a similar water percentage. 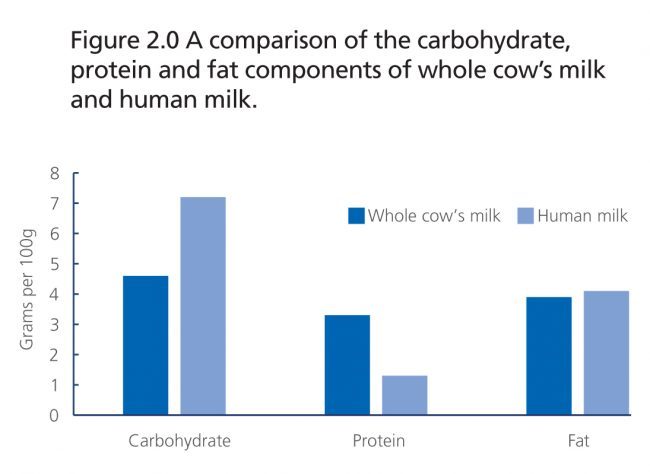 In order to meet the requirements of different species, milk from mammals is finely tuned with varying levels of nutrients. For example, cow milk has nearly double the protein of human milk because the weight gain that calfs experience within their first year of life is about 40 times greater than their human counterparts.

In addition, dairy milk is commonly advertised as rich in calcium, this is true; cow milk has nearly four times the amount of calcium in comparison to human breast milk because calfs require greater amounts of this mineral to develop properly. Cow milk is not suggested as suitable for human consumption until after the age of one because cow milk is specifically formulated to meet the requirements of calfs and their composition; not human infants. 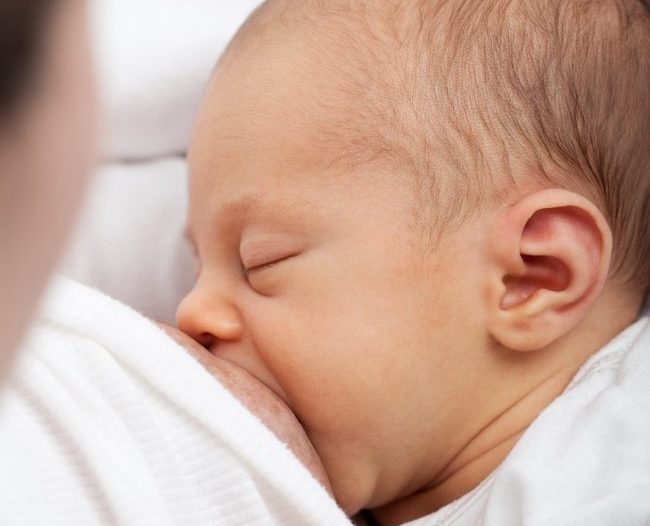 Dairy consumption can have a harmful effect of human infants and is a recognised cause which can induce intestinal rectal bleeding as part of the allergic response. The effect of the blood loss can cause cases of anemia and damage iron levels.

Furthermore, the calcium in human milk is better absorbed by the human body than the calcium that is absorbed after cow milk consumption, with dairy-drinkers even having an increased risk of hip fractures.

Ultimately, whilst evidence leans significantly towards human breast milk being optimal in a human diet, the bigger question is – why are we the only species to drink milk past weening anyway?

Perhaps milk is something we could do without entirely, or source from a plant instead of taking it from the baby of another species. Food for thought?