How can one person make a difference? It’s a cliché question, yet relevant all the same. In the world of animal rights, vegans save approximately 30 farmed animals a year, just by choosing to leave them off their plate. However, many yearn to make a larger impact. It’s true, there is a limit to what one person can do based on their own choices, but by changing the minds of others, one person’s impact is virtually limitless. Vegan public speaker Rebecca Cappelli of Let Us Be Heroes is on a mission to end animal suffering by coaching others on vegan advocacy through effective communication. She has built a successful public speaking platform to promote the plant-based movement, and she is now sharing it with others who wish to do the same.

Cappelli’s work within the plant-based space is far from linear. A native of France, she moved to China at the age of 18 to study Chinese. Following a graduate program back in France, she permanently moved back to Asia 11 years ago to become a Chinese-French interpreter, eventually moving on to work at a Beijing embassy and later transitioning to a successful career in sales and business development. She participated in the meat-heavy Asian culture until her perspective changed after adopting a dog from the dog meat trade. After this, “I saved dogs and cats from the streets whenever I found strays on my path,” she said.

Following this new connection with animals, Cappelli made a serious resolution. “About 3 years ago, I made a vow to consciously remove myself from violence and carelessness,” she explained. “I realized I was eating animals and causing pain mindlessly. So I went vegan on the spot, at a Japanese barbecue restaurant in Hong Kong.”

Not everyone comes to this realization on their own, which is why she has dedicated her work to helping others make the connection between what they eat and its effect on the planet, their health, and the animals. Her talks are tailored to those who “are living in ignorance,” as she was, prior to going vegan. She said, “I focus more on speaking to people in their workplace, over the lunch hour for instance. So far I have spoken at companies like Linkedin, Airbnb, Booking.com, Salesforce.com, private bank Julius Baer as well as smaller organizations, coworking spaces, and universities. I also did a TEDx ‘Eating Our Way to a Better World’ and spoke at SPCA.” 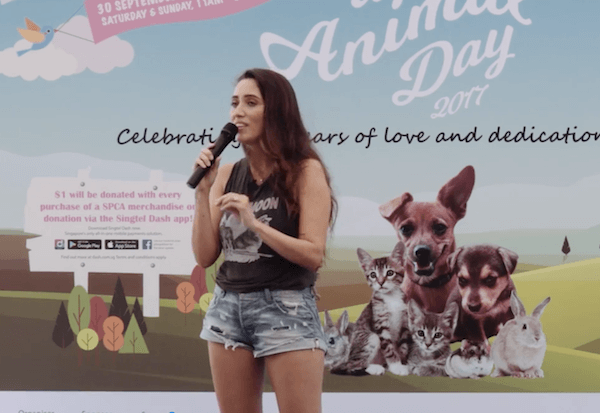 Despite the fact that she speaks to mostly non-vegan audiences, she affirmed that the feedback has been positive. She noted that one of the most memorable moments from her talks came from a mother who said she now finally understood her teenage daughters, who had both expressed interest in veganism.

Cappelli’s latest project is empowering others to give similar talks. She has developed 30 and 45-minute talk tracks for anyone looking to make a greater impact on their community. She offers the content pro-bono, and it also includes an hour and a half training session with her, where she provides insights on public speaking and how to master Q&A. Cappelli noted that she has already trained people “all over the world, and so far the feedback is great.” Anyone can take her up on the offer, meaning anyone has the power to make a difference.

Through her professional experience, Cappelli has learned that we cannot always measure the impact of our message, but she was quick to note that we should not undermine our power. “You truly do not know who you inspire. The one person in the audience frowning and looking angry might be the one doing research and transitioning right away. It happened a few times.”

Those interested in learning more can connect with Cappelli via Instagram at Let Us Be Heroes. She is also working on a short documentary inspired by her talk, which is expected to launch in early fall.