Brooklyn-based chocolatier FINE & RAW teamed up with vegan fast-casual chain by CHLOE. to launch dairy-free artisanal chocolates – including one infused with CBD – the nonpsychoactive cannabidiol in cannabis.

The collaboration consists of two flavors: Chocolate With Sea Salt is a sweet and salty 70 percent dark chocolate bar made from organic cacao beans, cacao butter, coconut sugar, and a touch of sea salt.

“This is one of the most deliciously forward thinking and creative chocolate collaborations we have ever done! The flavors and effects are beyond,” said Daniel Sklaar, FINE & RAW owner and founder, in a statement. 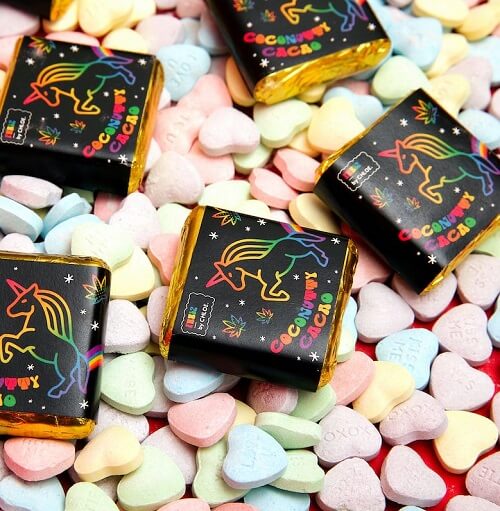 FINE & RAW began in Sklaar’s Williamsburg, Brooklyn-based artist loft, where he made small batches of chocolate for his friends for fun. Eventually, he began delivering his raw chocolates by bicycle to local shops. The factory is now based in Brooklyn’s Bushwick neighborhood and hosts factory tours and tastings.

All of FINE & RAW’s chocolates are organic, plant-based, and made using a bean-to-bar process. The company works with non-profit partners to source cacao beans directly for farmers, which ensures that they are paid fairly. According to the non-profit organization Food Empowerment Project, which promotes food justice across all aspects of society, many chocolate companies source their cacao beans from farms where child labor and slavery are still common.

The partnership also aids cacao farmers in developing organic farming programs, according to the website.

Rather than use dairy, FINE & RAW blends cacao with nut butter like cashew, hazelnut, and coconut to make a creamy, milk chocolate-like texture.

The by CHLOE. x FINE & RAW chocolate collaboration is available at locations in Boston and Providence. The launch initially included the vegan fast-casual chain’s NYC locations, but the Department of Health recently banned CBD edibles and drinks from restaurants throughout the city. The department made the decision – which was supported by Mayor Bill DeBlasio – on the grounds that it is “not approved as safe to eat,” according to a statement.