New vegan options are on the menu at the UK-based restaurant chain Café Rouge. The French-inspired concept recently launched its autumn 2018 seasonal set and a la carte menus at over 90 of its locations throughout the nation, including a few plant-based versions of popular dishes.

The set menu is split into starters, dinner, and dessert, each featuring one vegan French dish. These options include a Moroccan-inspired “soup de saison” with beans, sweet potato, apricots, dates, and a fresh coriander garnish for the starter; a creamy mushroom, pearl barley, and spelt risotto with parley, watercress, and truffle oil for dinner; and for dessert, diners can choose a bramley apple and blackberry crumble with a cinnamon-infused oat crumble or a dairy-free crème anglaise.

Patrons can also find new vegan options on the a la carte menu with the addition of a balsamic-glazed beetroot tatin, a root vegetable and chestnut parmentier, and a seasonal salad featuring chicory, beetrooot, apples, and chopped hazelnuts. A Moroccan-inspired tagine and a vegan chickpea burger served with frites or a house salad are available as well, as is lemon or mango sorbet for dessert. 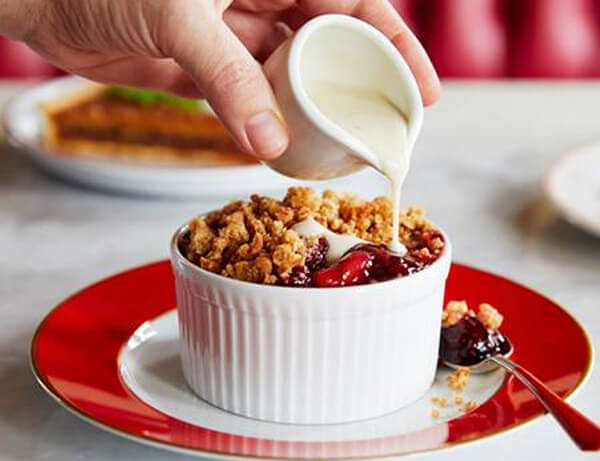 French cuisine is well-known for being centered around meat, butter, and cheese. However, Café Rouge isn’t alone in offering vegan French food. Last June, Alexis Gauthier, owner and head chef of the London French fine dining restaurant Gauthier Soho, announced that the three-floor restaurant would ditch all animal products and go vegan for ethical reasons. Gauthier acknowledged that the change would disappoint some regulars, and yet the restaurant’s “Les Plantes” vegan tasting menu is highly popular among customers.

New York City’s Délice & Sarrasin serves an exclusively vegan French menu, with plant-based takes on meat-heavy dishes such as coq a vin, boeuf bourguignon, steak frites, poulet basquaise, and tournedos rossini made using vegan Impossible Burger meat. The restaurant was previously vegetarian but converted to a plant-based menu in October 2016 with the aid of NYC-based consulting firm Veganizer. According to data from the company, Délice & Sarrasin reported a 350 percent increase in sales and a 1,200 percent increase to its social media following.

Restaurants that continue to offer animal-based dishes, but make conscious efforts to add vegan options to the menu, have also reported a boost in sales. Research released by food-focused platform Foodable Labs revealed that U.S. restaurants that have included plant-based options saw an average increase of 13 percent in customer traffic, despite the nation’s overall restaurant traffic being down.