Cake Shake USA, a new New York City milkshake parlor that opened in late July, has made the decision to go vegan.

While the company has always heavily promoted its vegan options on social media, it still offered a few non-vegan options, such as the Flaming Hot Chocolate Cheeto Shake. However, not even two months old, Cake Shake has retired all of its dairy-based recipes in order to become a completely cruelty-free company.

As Cake Shake does not have an official website, the owners made the announcement on their social media accounts, along with a screenshot of their new all-vegan menu. They wrote, “So… we’ve made a choice, it goes against what many have told us is ‘smart financially’ but it’s a choice we feel is best for our customers, best for the planet and best for animals. We’ve decided to go 100% plant-based.”

The announcement continued, “From now on ALL OF OUR ICE CREAM, toppings, cakes, shakes, mixers etc will be PLANT BASED, VEGAN, and 98% of our products from toppings to sauces will be gluten-free. We hope that you will support us on this journey to change the game and to be leaders in the dessert market, we will need you to make this happen. Thanks to everyone who has been so supportive so far!” 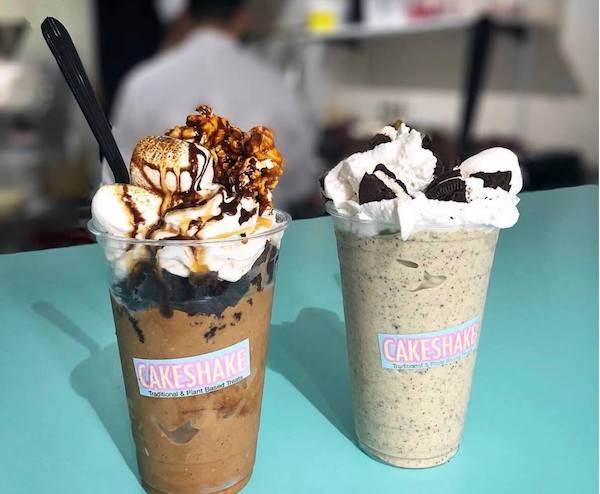 Cake Shake’s extravagant milkshake creations have not suffered as a result of this decision. The shop still sells its wildly inventive freakshakes, like the seasonal Vegan Pumpkin Spice Waffle Shake made with pumpkin spice ice cream, warm waffle bits, candied pecans, whipped cream, and a balsamic maple drizzle. Another signature creation on the menu from the start is the Pop Mocha Shake – a sweet concoction of tres leches ice cream, espresso reduction, chocolate cake, handmade caramel corn, and whipped cream.

Patrons can also customize their own cake shake, single scoop, or sundae, which makes the shop accessible to both ice cream purists and those who like to get creative.

Vegan ice cream has become both a grocery store and ice cream shop staple, which makes the emergence of vegan milkshakes a natural follow-up. According to the company’s Instagram, Cake Shake LA is coming soon.