Traditionally home to sugar-laden sodas and junk food, vending machines are getting a long overdue makeover, connecting consumers to healthier food. Canada is the latest to get in on the trend as British Columbia residents are about to have even more easy access to healthy and delicious vegan food with a new vending machine stocked by The Green Moustache Organic Café inside a Whistler sports center.

The vegan vending machine will feature organic and gluten-free vegan meals and snacks including veggie wraps, the ever-ubiquitous grain and greens filled “bowls”, and assorted desserts all made from plant-based ingredients.

“Unlike the traditional vending machine model, we are restocking daily with freshly prepared meals and snacks,” The Green Moustache Chief Strategy Officer Geoff Telfer said in a recent interview. “We believe these modern vending machines are an efficient and sustainable way to expand our reach and to further our mission of bringing health-promoting, nutritious food to every neighborhood.” 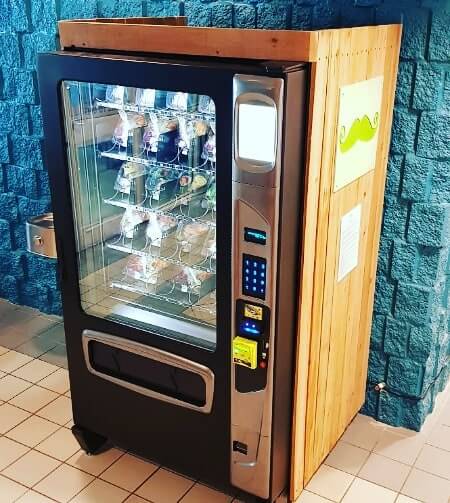 If the inaugural placement is successful, the company is looking to expand into other areas such as hospitals and schools across Canada.

The Green Moustache chain was started in Whistler by husband-and-wife team Nicolette and Pierre Richer. The couple says they were inspired by their three children to make healthy organic whole-food based snacks and treats; the restaurant chain became a way “to carry this inspiration through to our community,” they note on the company website. The restaurant serves an array of raw, vegan items including breakfasts, smoothies, lunch dishes, and desserts.

The Green Moustache currently has five locations in Canada with three more set to open later this year.