Nick Blevins, a 29-year-old center for the national Canadian rugby team, was recently featured in a video by Chek, a Canadian news outlet. Blevins, who is considered to be one of Canadian’s most formidable rugby players, credits his success to his vegan diet. He’s also the co-founder of his own vegan cheese and yogurt brand, Beetroot Nutrition.

Blevins began his professional rugby career in 2009, but up until four years ago, he struggled to keep up. He told the news outlet, “I’d come in and they’d let me go for awhile then I’d come in again, and I just wanted to be more consistent more regular.” He decided to give a plant-based diet a try and has since gone on to greatly enhance his athletic performance and his rugby game.

The athlete noted, “As far as fitness goes I ran a 1600 meter – which is a pretty standard test – and it was the best score I ever ran.” He also noted that prior to making the switch, he suffered from several chronic injuries, including tendonitis. “As soon as I switched my diet a lot of that stuff cleared up. Its no joke,” he said. 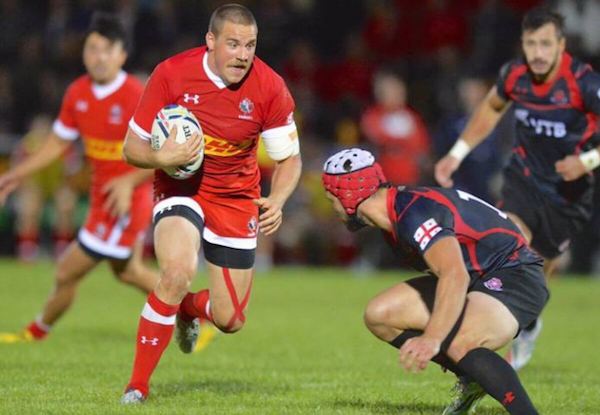 As the only vegan player on the men’s national team, Chek interviewed Blevins’ teammates to see what they thought of his diet and his performance. Cole Keith said Blevin’s is “one of the top three [players] in fitness,” and Lucas Rumball noted, “He’s one of the toughest guys I know.”

Many equate rugby to “football without padding.” It’s a rough-and-tumble sport, and injuries are common. However, Blevins has not reported broken bones or any major injuries since going plant-based, demonstrating that one does not need dairy milk to ensure strong bones.

In the video with Chek, Blevins listed a few of his go-to fuel foods, including avocado toast, oatmeal, shakes, and “lots of fruit.”  He told the outlet, “I attribute quite a bit of my success to what I eat.” His belief in the power of a plant-based diet has led him to launch his own vegan product company, Beetroot Nutrition. He and his fiancé, Michelle Helmeczi, started the company in 2016, focusing on plant-based cheeses and yogurts. Cheese flavors include Cheesy Dill, Sundried Tomato + Basil, and Chipotle. On the sweet side, the company offers both Strawberry and Vanilla Bean cultured cashew yogurts. Beetroot products are currently available for purchase in various markets in the Calgary area, as well as in certain Calgary cafes.

Although Blevins may be the only vegan on the national team, he is not alone in regards to professional athletes. From the NBA to the NHL and NFL, veganism is picking up steam among these elite performers. It’s also become popular with Olympians and ultra-endurance athletes. These competitors are at the top of their game, and as Blevins says, “You can’t argue with results.”