The Gloucestershire-based team received the certification after making the switch to renewable electricity from the world’s first certified vegan energy source, Ecotricity at its home stadium, New Lawn. About a quarter of the stadium’s power comes from solar panels on the roof. Additionally, the club’s lawn is maintained by a solar-powered lawnmower, electric vehicle charging stations are available at the stadium, and fans are encouraged to car share in order to further curtail carbon emissions.

“It’s a real honour to be the very first sports club in the world to be named carbon neutral by the UN,” said Forest Green Rovers chairman and Ecotricity founder, Dale Vince. “We’re a small club with big ambitions, and it’s fantastic we can work together to champion the sustainability message worldwide.”

Vince hopes that the certification will encourage other football clubs to follow suit in a bid to use the sport’s massive reach to promote sustainability. “It’s great to be first, but I believe it’s only a matter of time before the big boys like Real Madrid, Man United and the San Francisco 49ers follow our example. I’m personally looking forward to working more with the UN to help spread the word about the environment through football,” he added.

NEWS | Forest Green Rovers has become the world’s first United Nations certified carbon neutral football club, after signing up to the @UNFCCC Climate Neutral Now initiative for the upcoming season. Click the link in our bio to read more.

Additionally, Vince has committed to serving environmentally-friendly vegan food to fans, players, and staff and the team became the world’s first vegan football club after receiving certification from The Vegan Society in 2016. In addition to this, the team has announced that it is venturing into new territory with the launch of “Little Green Devils,” a range of vegan school lunches featuring housemade, allergen-free plant-based meats.

“We’d like to be in every school at least once a week because that would be a lovely thing to do,” said Vince. “It’s about getting kids to eat healthier foods that can be vegan, gluten-free and free of all 13 major allergens – so it’s super healthy but also has some football heritage which may encourage young kids to get involved.” 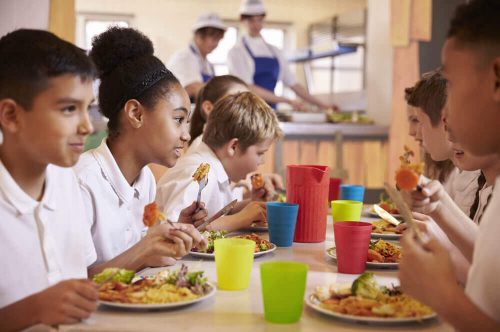 The vegan school lunch range is prepared in a dedicated vegan factory in Gloucestershire and is powered by renewable Ecotricity energy. All product packaging is fully sustainable, featuring “pioneering” compostable liners and labels. According to the team, there has already been significant interest among major food service providers that collectively serve more than 8,000 schools throughout the UK.

Little Green Devils will be made in the Gloucestershire facility from fall 2018 onwards. Chairman Vince is already looking to the future potential of the vegan school lunch range: “I don’t see why we couldn’t go international as we’ve been approached by universities so I can see it very quickly going beyond schools and maybe the country.”

In the United States, vegan school lunches are also creating a buzz. California’s Santa Barbara Unified School District reports that its vegan school lunch program has been a hit with students while high demand pushed 35 schools within the Los Angeles Unified School District to adopt a plant-based school lunch program as well. Last October, all New York City public schools committed to offering students at least one vegan option daily thanks to the effort of the non-profit organization The Coalition for Healthy School Lunch.