Celebrity chef and philanthropist, Jose Andres, recently projected that the future of food is plant-based. Andres explained his plant-based predictions in an interview at the South by Southwest (SXSW) festival last month.

SXSW is an annual nine-day conference held in Austin, Texas, to explore and highlight the latest innovations in entertainment and thought trends. Andres participated in a joint panel, Changing the World Through Food, with television personality, chef Andrew Zimmerman. The panel was moderated by former Food & Wine Editor in Chief and current food podcast host, Dana Cowin.

Andres expressed a number of opinions regarding both food and politics, ranging from restaurant protocol, eating local, respecting women, and of course, the future of food. He said, “If we’re going to be feeding 9 billion [people], we need to be open in many ways. Impossible meats [sic] is a great thing.”

Andres continued to praise the plant-based kingdom, saying, “A vegetable — a pineapple — you put it in [your mouth], it’s elegant from the beginning almost to the end. Why are we eating meat still? That’s why women seem to be eating more vegetables than men, because women always are smarter. Men, we’re stupid.” 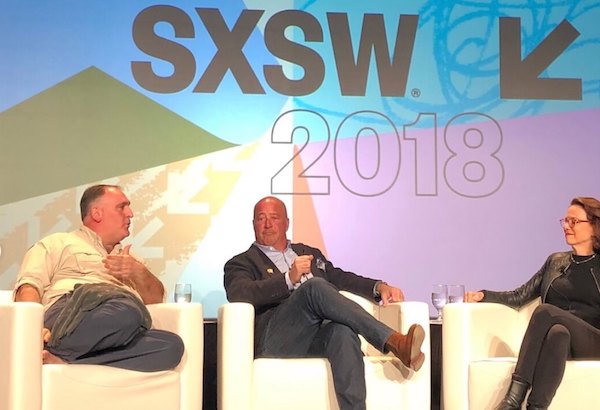 Finally, Andres concluded, “I’m not a perfect guy…but I aim to be a better person.” The chef owns dozens of restaurants throughout the US and one in Mexico, and all of them offer meat and other animal products. However, Beefsteak, his fast-casual concept, does focus on vegetables and includes several vegan options.

In addition to his esteemed reputation in the kitchen, Andres is also known for his humanitarian work. He founded his charity, World Central Kitchen, to help those in crisis by providing nourishing meals on a large scale. Most recently, he donated over three million meals to the residents of Puerto Rico following the devastation of Hurricane Maria.

The idea of a plant-based future was a hot topic at this year’s SXSW. Multiple vegan influencers spoke across a number of panels to inform the audience about the benefits and advancements of the plant-based lifestyle. Notable speakers included race car driver and activist, Leilani Munter, Beyond Meat CEO Ethan Brown, and Executive Director of the Good Food Institute, Bruce Friedrich.