The Faux Joe isn’t the first vegan-friendly sandwich option on the menu, but it is the restaurant’s first item to intentionally replicate meat. The other two items, the BEETsteak Burger and Beefsteak Tomato Burger, substitute the hamburger meat for thick cuts of beets and tomatoes, respectively. Although both are complex and flavorful on their own, they lack that distinct chew and umami flavor of beef.

Customers seeking out a more realistic burger experience without harming the animals, their health, or the environment, can now appease their cravings with the “beefy” Faux Joe. The star of the sandwich is a mixture of Beyond Meat Crumbles, diced vegetables, and chilorio sauce, imitating the filling of a sloppy joe. This savory, meaty mix is topped with avocado (one-fourth, to be exact), tomato, vegan chipotle mayo, and sea salt. The stack is served between two olive oil vegan brioche buns. 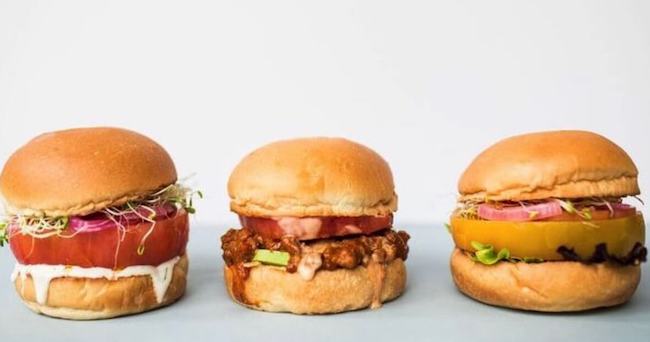 Beefsteak is meant to appeal to the masses as a healthy, affordable, and substantial dining out option. A good portion of the menu is dedicated to the ever-popular bowl foods consisting of a grain, veggies, a protein, and a sauce. Unlike some of Andres’ restaurants, which require reservations well in advance and a relatively steep price point, Beefsteak chains are familiar, accessible, and normalized, which in turn, normalizes plant-forward eating. The thoughtful addition of the Beyond Meat-based burger may help to further advance the notion that one does not need to eat animals to enjoy their favorite foods.

The Beyond Meat Crumbles have also made their way into other omnivore chains. Most recently, Freebirds, a build-your-own burrito chain with 73 locations across the U.S., added the plant-based product to their protein selection. Known for their foil-wrapped burritos of epic proportions, you can now order a vegan Beyond Meat burrito the size of your forearm.