With the devastating loss of Linkin Park’s frontman Chester Bennington earlier this week, thousands of fans and fellow celebrities have taken to social media to express their heartbreak.

His music aided many LP followers through dark times of their own, however Chester will not only be remembered for the strength that he gave to his fans, but yet his compassion to all living beings. In a tribute to the late rockstar, we reflect on Chester not only as a talented lyricist but for his many acts of altruism.

Through Linkin Park’s “Music for Relief” foundation, Bennington was involved in many charitable causes in a plight to support victims of natural disasters such as Hurricane Sandy, and the Japan Tsunami. In addition to raising money, Bennington took further action for humanitarian causes by performing fundraiser gigs and even personally helping to clear up some of the aftermath left from Hurricane Katrina.

Although clearly battling demons of his own, Chester’s philanthropy knew no bounds. In a collaboration with People for The Ethical Treatment of Animals (PETA), Bennington spoke up for the basic rights animals to keep their own skin. 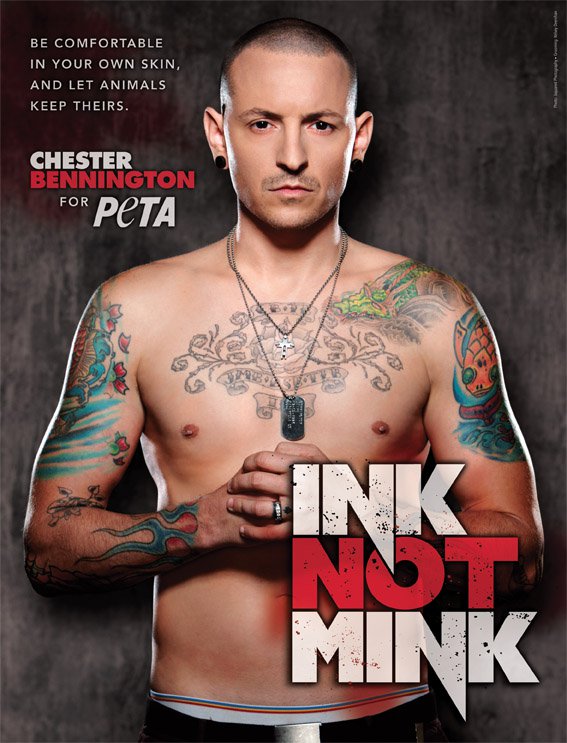 In the ‘Ink Not Mink‘ campaign, PETA2 collaborated with Chester with the aim to expose the Mink fur industry and encourage his fans to choose tattoo “ink” instead of wearing animals. “Electrocuting animals, skinning them while they’re alive—these are acts of inhumanity.” He explained to PETA, “Because it’s out of sight, it’s usually out of mind for most people, and we need to show our respect for all creatures of this world.”

Bennington not only had an adopted child but as a dedicated animal lover, became proud foster parent to family dog “Chance” at last year’s Pugtoberfest: “We’re excited to bring Chance home with us as a new member of the family,” Bennington said. “Now Haba (Bennington’s current family pug) has a new brother. My family and I are very happy to be here.” 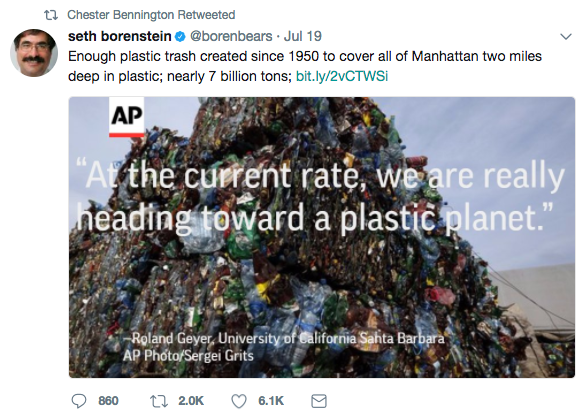 With his last post on Twitter concerning the plastic waste polluting the Earth and older tweets regarding the political issues around climate change, it would appear that he felt strongly about protecting our environment too.

We would like to offer our condolences to Chester’s family and friends – It is both inspiring and heartbreaking to look back on all the good he has done for others and his passing is truly a loss for humans and non-human animals alike.