“In recent times our company was receiving more and more enquires for a sofa with the look of the classic Chesterfields but made without leather,” said Callum Tombs, sales director at Chesterfields. “We currently produce a range of sofas in velvet and wool but have decided to make a range in environmentally friendly faux leather to satisfy demand.”

In the style of 18th century classics, the new vegan leather range features deep-buttoned sofas and chairs with scroll arms in “fashion-forward” colors. Only vegan-friendly glue and foam is used in the manufacturing process. Additionally, Chesterfields’ velvet sofa range is now vegan-friendly. 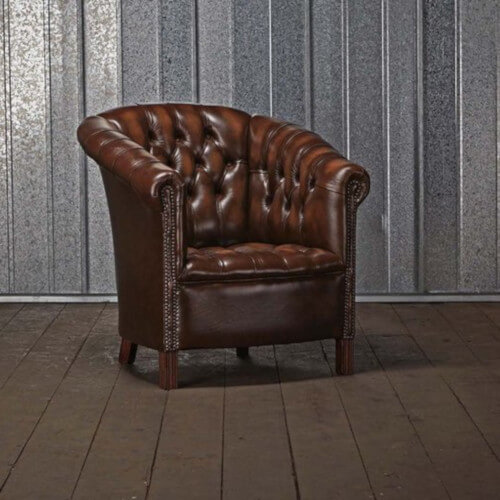 “This range and all ranges going forward will use no animal products in either the glues or foam used in the frame or padding, two areas where other manufacturers especially ones abroad are still using animal products,” Tombs added.

Vegan interior design is becoming increasingly popular as more turn away from animal-based materials like leather, wool, and silk. Last April, British designer Helen Winters was awarded “Designer of the Month” by VeganDesign.org, a US-based resource for cruelty-free interiors. She was also the first in the UK to receive certification for her use of vegan leather.

VeganDesign has been featured by major outlets such as NBC, “The Today Show,” TLC, The Huffington Post, and The Hollywood Reporter. Last October, the latter highlighted vegan interior design as a rising trend among Hollywood homeowners looking to live more sustainably and ethically. It also acts as an online directory of vegan interior designers across the world, from LA to Bali and New Zealand.

Even Meghan Markle is leaning toward vegan interior design, choosing vegan-friendly, non-toxic paint for her first child’s nursery, as opposed to other wall paints that contain animal-derived ingredients like beeswax and milk proteins, which are used as binders.

The Organic and Natural Paint Co., the company that the Duchess of Sussex chose for the nursery, was founded by a father concerned about VOCs, aka volatile organic compounds, that can affect air quality and infant health.