Amid mounting media attention about families fleeing their home countries in search of international asylum, a compassionate vegan group has arranged a bake sale to raise money for those affected.

Funds raised will be donated to RAICES and PASO, two human rights groups advocating for fairer treatment of immigrants. “Please join us as we sell delicious vegan baked treats to raise money for immigrant families and asylum seekers in the United States,” host of the event Marla Rose wrote on Facebook.

Donations made to the two organizations will “assist in their efforts to provide advocacy, legal counsel/protection, reunification and legislation for immigrant children, families and refugees.” 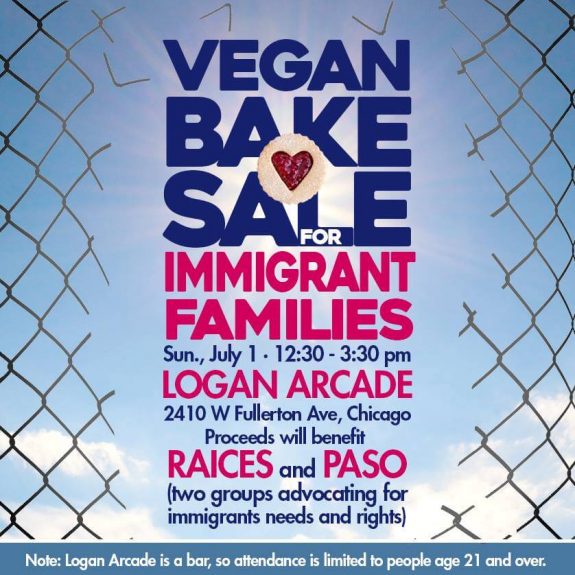 Local vegan catering company Fancy Plants Catering will donate two boozy tiramisu dishes. “Vegan Tiramisu! We started by making a delicious cake to soak in coffee and Kahlua (yes, it’s vegan), made a cashew mascarpone cheese to use in an espresso and a vanilla layer and turned it into a 6 layer tiramisu,” said Fancy Plants Catering owner Kevin Schuder. “If you have a hedonistic side, I suggest you indulge! We’re making 40 servings.”

Chocolate chip ice cream sandwich cookies will also be offered, among many more baked goods. Rose noted that one baker has a personal kinship to the bake sale’s cause. Aida Nava, of new vegan baking business Pink Pastel, has roots in Mexico and said that this fact has created problems for her family. “[We] have struggled to become residents/citizens and have had to endure many financial and educational disadvantages and struggles because of it,” she said. “Now with this current administration, there are even bigger concerns facing all immigrants and I want to help in any way that I can.”

Nava will be donating vegan Rainbow Sprinkle Rice Crispy Treats to the cause.

Another vegan initiative sees profits being donated to RAICES as well as other organizations working to reunite families separated at the border. Cruelty-free cosmetics brand Lipslut debuted a vegan lipstick called F*ck Trump to further the philanthropic cause.