The city court of Bucheon, South Korea, recently found a local dog meat farmer guilty of unlawful animal slaughter, ruling that meat consumption was not a legal justification to kill dogs. In a country where dog meat is seen as a delicacy, and even celebrated, this court decision has made a significant statement, and national lawmakers are taking action to ban dog meat nationwide.

The dog meat farmer was first persecuted following complaints by animal activist group, Care, which accused him of “killing animals without proper reasons” as well as violating building and sanitary regulations, according to South China Morning Post. The farmer was charged and found guilty on the premise that producing dog meat is not a “proper reason” for slaughtering canines. He was fined 3 million won ($2,700 USD) and did not appeal.

Care lawyer Kim Kyung-eun stated, “It is very significant in that it is the first court decision that killing dogs for dog meat is illegal itself. [This decision has] paved the way for outlawing dog meat consumption entirely.” 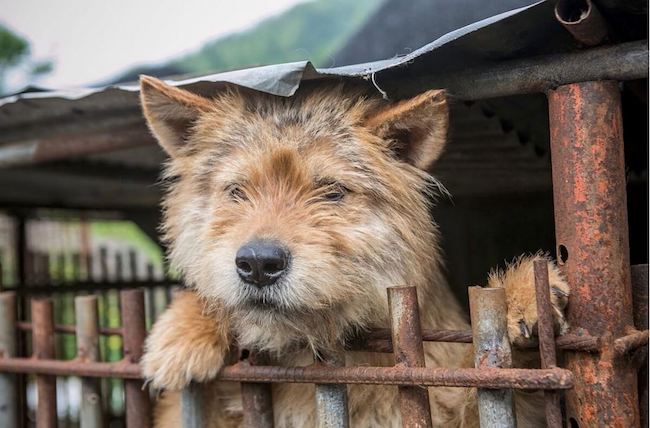 True to Kyung-eun’s predictions, a legislator from the nation’s Democratic Party introduced a bill in parliament to end the dog meat industry, limiting the slaughter of animals to “livestock” species. This bill has yet to go to a vote, though activist groups are encouraging the public to contact their representatives and voice their support for the legislation.

Dog farmers in the nation vehemently opposed the ruling, calling for the government to explicitly legalize dog meat consumption and license dog slaughterhouses. There are currently 17,000 dog farms in South Korea, but unlike the livestock industry, there are no dedicated slaughterhouses, which necessitates that dog farmers double as butchers.

There has been mounting international uproar against South Korea and other Asian countries that participate in the dog meat trade, and according to the South China Morning Post, dog meat consumption has decreased in the country as the younger generation has been influenced by these external pressures. International organizations such as the Humane Society are working diligently to decrease the number of dog farms in the world, contracting with dog farmers to relinquish their animals and helping them to seek a livelihood in a more compassionate industry. During the 2018 Winter Olympics, the Humane Society successfully shut down one farm in Pyeongchang. Two of the dogs found loving homes with Olympians Meagan Duhamel and Gus Kenworthy.