The classic ’80s candy Bonkers! will return to the market for the first time in over 20 years after making its official debut at the Sweets & Snacks Expo last week in Chicago. Unlike the original version of the soft fruit chew, released by Nabisco in the mid-’80s, the new Bonkers! candy is vegan and kosher.

According to a press release, the nostalgic sweet is now made by California-based candy company LEAF Brands, which is known for producing iconic American candies like Jolly Ranchers and Astro Pops.

Bringing Bonkers! back to market hasn’t been simple. “Bonkers!®, proved to be our most challenging product to bring back due to the complexities of the machinery and working through many old formulas from 35 years ago,” said LEAF Brands CEO Ellia Kassoff. “Additionally, we had to find the inventor (who’s now retired) then search for the old flavor companies with the original flavors.

“We also worked closely with our Bonkers fans on our Facebook page to ensure we were on the right track. We’re glad it’s finally done so we can make Bonkers!® fans happy again,” Kassoff added. 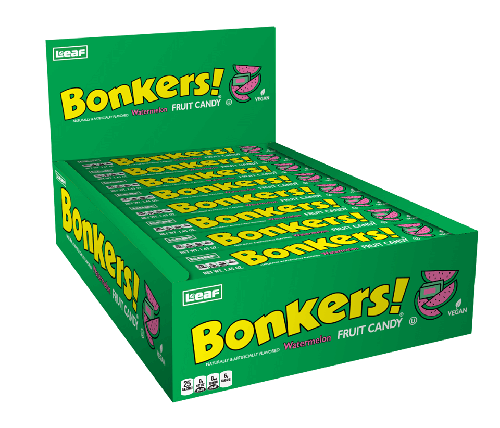 News of the candy’s resurgence had been up in the air for a few years. LEAF Brands first acquired the Bonkers! trademark in 2012 and announced plans to distribute by 2015. Uncaptioned photos of test batches of Bonkers! candy appeared on the candy’s official Facebook page in 2014. The company also kept fans engaged by giving production updates via Twitter as it worked on perfecting the texture and flavor. In November 2016, the company tweeted:“We made more samples of Bonkers Fruit Chews on the line last week and we think they look pretty good! Getting closer but no date yet.”

Bonkers! was not the only vegan candy to debut at the Sweets & Snacks Expo this past week. Popular nut butter brand Justin’s debuted its upcoming dark chocolate almond butter cups and dark chocolate cashew butter cups, both of which are vegan. According to recent market research by Mintel, vegan candy options have more than doubled since 2013, growing by a total of 140 percent.

The new vegan Bonkers! candy will come in flavors Watermelon, Lemon Lime, Cherry, Grape, Orange, Chocolate, and Strawberry and are set to begin shipping across the nation this summer.