Coca-Cola European Partners (CCEP) are looking to get in on the current plant-based boom by introducing three dairy-free smoothies to Europe.

The Latin American brand titled Adez, is fruity and soy-based and will be on the UK’s shelves this March. The product was first introduced in 2006 by Unilever. However, this turned out to be an unsuccessful endeavour as the demand for dairy-free and plant-based products simply wasn’t as high then as it is now. 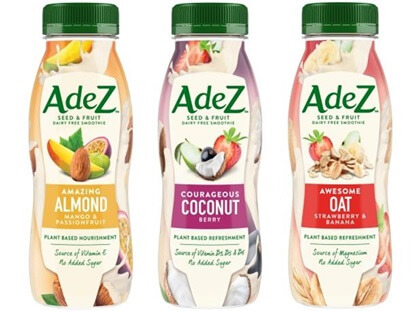 Simon Harrison, the customer marketing director for CCEP, said that Adez stood out to them due to the uniqueness and the fact that it doesn’t have any current direct competition. He explained, ‘it’s very different because it’s plant based and it’s more than just fruit. It has added vitamins and minerals. So it doesn’t have a head-to-head competitor, which is part of the appeal.’

Harrison then went on to add, ‘there has been a lot of fantastic work done by other manufacturers in this area, it is already such a bigger market than people would think. There are a lot of trends happening at the moment that we think this would be a great fit for.’