The ads show Colin along with another calf named Woody—the two are residents of the sanctuary who were rescued from a dairy farm in upstate New York. Text on the campaign describes the fate of most dairy calves: “Taken from their mothers to be killed because of milk.”

The campaign aims to create greater public awareness of standard practices in the dairy industry which include separating newborn calves from their mothers within twenty-four hours of birth. Male dairy calves, who have been shown to have emotional lives, are killed for meat at a young age. Female cows are repeatedly impregnated and separated from their young to provide milk for humans, until they, too, are slaughtered for meat.

This is not the first time non-profit organizations have used public transportation to connect humans with the experiences of animals used for food. In January of 2017, PETA took over all the ads in London’s Clapham Common tube station, and earlier this year, the Vancouver Humane Society ran ads on the sides of city buses that focused on pigs and children’s relationship with animals. 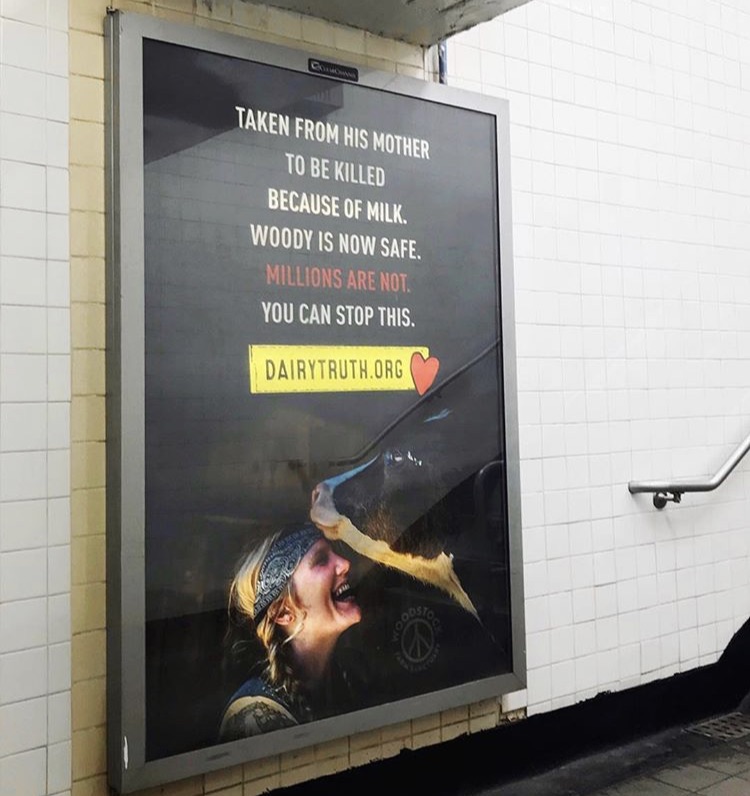 Investigative journalists and documentary filmmakers also continue to shed light on parts of the dairy industry generally hidden from the public. This year, BBC’s “The Dark Side of Dairy,” which showed the journey of discarded dairy calves, led to a major ferry company banning their transport.

Thanks to this greater awareness of how cow’s milk is mass-produced for human consumption, and to the ever-increasing availability of nutritious plant-based alternatives, dairy sales have been in decline in recent years.

And at least some New Yorkers seeing Woodstock Farm Animal Sanctuary’s subway ads have already given up or reduced their dairy intake. Last year, New York City ranked #1 in Harris Poll’s national survey of the most vegan-friendly cities.

Woodstock Farm Animal Sanctuary’s ads can be seen in the north entrance of the downtown N/R station in midtown Manhattan. The posters also direct viewers to DairyTruth.org, the sanctuary’s new website where visitors can learn more about the dairy industry.

Kaepernick has become a divisive figure; the former San Francisco 49’er was highly criticized for taking a knee during the National Anthem to bring attention to racism and police brutality and killings of young black men. But the athlete has earned a number of fans, some even calling for him to be recognized in a vegan Ben & Jerry’s ice cream flavor.