Sushi is rolling with the times as more vegan options than ever before are being served around the world.

Despite being several hundred years old as a dish, sushi is still developing and diversifying. Once considered highly exotic (think Breakfast Club lunch scene) and the height of sophistication, sushi, in a variety of forms, is now available from chain restaurants, stalls, and even supermarkets in a number of countries.

Sushi — as we recognize it today — was eaten in Japan towards the end of the Edo Period (1603-1868), although its origins go way back to several centuries before. The UK got its first taste of the South East Asian delicacy in 1974 when the restaurant Ajimura opened in London.

For many, its sushi’s association with raw fish that has put them off. But with its rice base and an endless assortment of toppings, sushi is incredibly versatile and has many delicious vegan varieties.

The Impact of Fishing

As Japan is a collection of islands, it has understandably relied on the surrounding Pacific as a food source. The East Asian country’s highly fish-centric cuisine is demonstrated by the fact that Japan consumes 6 percent of the planet’s fish harvest.

As well as being an integral part of the national diet, fish and fishing are also ingrained in Japanese culture and folklore. There is even an ancient Shinto God of Fishing named Hoderi.

With fish being so much in demand, overfishing has long been a problem and first gained recognition at the start of the twentieth century. Overfishing in Japan has been facilitated by lax caps on fishing hauls and new technology such as spotter aircraft, which are used to locate high-density fishing areas.

Japan remains the largest consumer of Pacific bluefin tuna, and the fish is an especially common component of sushi, in pieces like toro sashimi. This has taken its toll on the tuna population. In 2017 Pew Environment Group reported that the fish was now at a 2.6 percent of its historical high. 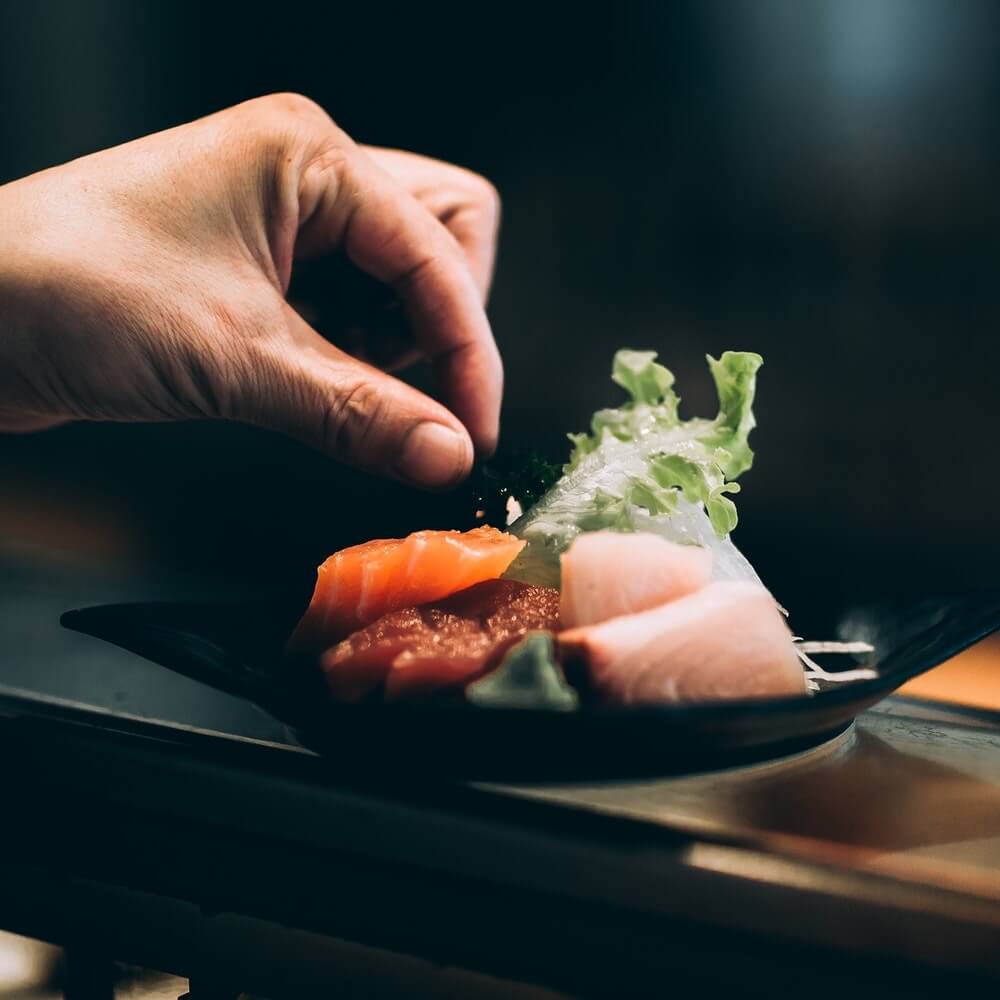 While fish has always been a popular foodstuff in coastal areas such as Scandinavia, it has become increasingly common throughout the west; its popularity is largely due to fish being lower in calories and fat than most meats.

The high content of healthy fats such as Omega 3 has also made fish a popular meal choice. The Mediterranean diet, which is high in olive oil, vegetables and fish has also been touted as healthy, boosting the sales of oily fish such as mackerel and sardines.

The growing popularity of sushi has also placed higher demands on the fishing industry, which in turn, has led to more intensive fishing.

It is estimated that 90 percent of the world’s cod, shark and swordfish populations have disappeared due to overfishing. Fishing methods such as net trawling, which involves dragging huge weighted nets across the seabed, is responsible for disrupting the ecosystem and destroying coral reefs.

Reefs are an essential part of the oceanic environment, they assist in the ocean’s carbon and nitrogen-fixing and protect coastlines from erosion. It is estimated that 20 percent of the Earth’s coral reefs have already been destroyed, with overfishing being cited as one of the main causes.

Trawling is also completely indiscriminate in what it tears from the ocean floor. For every pound of viable fish that is caught, five more pounds of other marine species (bycatch) are also caught. As these are not fit for human consumption, they are usually left to expire and then thrown dead back into the water. According to a research paper published in Science Magazine, the intense overfishing of our oceans could mean fishless seas by 2048.

Common reasoning for not imposing welfare policies upon fisheries and the treatment of fish is based upon the assumption that fish do not experience pain.

As simpler organisms, with less developed nervous systems, the theory has long been that fish were simply not evolved enough to experience pain or trauma. Their brain mass is small, around one fifteenth the volume of a similarly sized bird of mammal, and it was considered a brain incapable of having the neuro-physiological capacity for a conscious awareness of pain.

It can also be hypothesised that we as humans find it more difficult to consider fish as creatures capable of pain, as they bear so little likeness to ourselves. Fins and a tail make it trickier for us to empathise.

The assumption that fish are too basic a creature to perceive being hurt is counteracted by their numerous nerve endings and nociceptors, which are close to the skin.  Studies have shown that fish release the same pain-transmitting chemicals as humans when they experience impact, and exhibit distress when in a confined environment such as a net.

An article published in Hakai Magazine categorically stated that fish do feel pain. This was the outcome of multiple research projects over 15 years into this matter.

One of the contributors to the study, Penn State University biologist Victoria Braithwaite, commented,“more and more people are willing to accept the facts,” Braithwaite says. “Fish do feel pain. It’s likely different from what humans feel, but it is still a kind of pain.”

The Rise of Vegan Fish

For those who enjoy the taste of fish, new innovations in food technology mean fishy sushi can now be made without any sea creatures. Vegan seafood company Sophie’s Kitchen has created vegan shrimp and scallops from pea starch, while UK company Ima has perfected its recipe for vegan salmon using marinated carrots.

Father and Daughter company Ima (the Japanese word for “now”) founded the company to combat overfishing and Ima’s vegan salmon roll was recently added to the fridge section of Planet Organic.

Speaking about its mission to fight plastic pollution by using fully biodegradable trays, Ima said, “we’re friends of the ocean. It makes sense for us at Ima, because sushi comes from the ocean but plastic sushi containers and soy sauce tubs are polluting the ocean. We want to change this.”

Vegan sushi has also made quite a splash in New York, where vegan restaurant Beyond Sushi serves up ingenious morsels such as the Sunny Side Roll. This eye-catching dish is made of black rice, fennel, avocado and butternut squash topped with almond pesto. The plant-based chain is so in tune with the market demand for plant-based food, it recently secured a $1.5 million dollar investment from the aptly named investment series, Shark Tank.

One way that vegan sushi is being used to suit the demands and pace of modern society is that it is now being delivered straight to people’s doors by the vegan food company, Veestro Foods. The US company has partnered with Ocean Hugger Foods to bring vegan “Ahimi” sushi bowls directly to your home, office or park bench if you’re so inclined.

On its website, Ocean Hugger Foods cites “limiting or even stopping overfishing and therefore the destruction of our oceans” as one of its motivations for creating vegan fish.

Where to Get Vegan Sushi?

If you’re in the market for vegan sushi but aren’t sure what some of the items are, below is our quick list of sushi slang.

Maki is the Japanese word for “roll”

A Hosomaki is a small roll with one filling, usually wrapped in nori

A Futomaki is a large roll with two or more fillings

A Nigri is an oblong of rice with the selected filling on top, often secured with a strip of seaweed

A Gukan is where the sushi filling is chopped, piled on top of the rice and then wrapped in nori

Inari are parcels of rice and sometimes other fillings, stuffed into a fried tofu skin

Onigiri are triangles of rice and filling, sometimes wrapped in nori like a salty samosa

While many people enjoy catching up over a platter in a sushi restaurant, the dish is most commonly eaten at lunchtime as a light bite. Below is a rundown of the best places in the UK to get your sushi fix.

Other tasty vegan YO! Sushi dishes gliding past your table include:

If you’re wanting to roll with the lunches and make your own sushi, here is our list of 11 top vegan sushi recipes.

This step by step recipe from Lazy Cat Kitchen makes delicious futomaki filled with red cabbage, peppers, and carrot. Once you have this technique down pat, you can mix it up with whatever fillings you fancy.

Delicious and dazzling, this recipe uses beetroot powder to create an extra eye-catching base for the various veggie fillings.

Demonstrating how a few simple ingredients can create so many different dishes, this recipe creates six different onigiri, including carrot and mint and matcha and edamame.

If you fancy a break from rice, this raw sushi recipe replaces the grain with a blended sunflower seed pate.

Keeping it simple, these protein-rich inari rolls are perfect pockets of tastiness.

This recipe uses soaked sunflower seeds to recreate tuna and is filled with quinoa.

A little handheld parcel of joy, made with shiitake mushrooms and black sesame seeds.

Made using firm tofu and slices of avocado, these rolls are then drizzled with a vegan, mayo-based sauce.

Rice free, but still satiating, these spicy bites are topped with a punchy avocado mayonnaise.

Crafted from layers of tofu omelet and sliced vegetables, this looks like a stunning sushi lasagne.

11. Sweet Sushi from Zucker and Jagdwurst

A sugary twist on traditional sushi, this recipe uses coconut milk and fresh fruit to make a fun, and flavorsome pudding.