When a crayfish was boiling alive at a restaurant in China recently, the animal used a claw to remove a limb and free itself from the pot where fellow crayfish remained. This sent the Internet into a frenzy after a video of the animal’s action was shared to the popular Chinese social media platform Weibo by someone with the username “Jiuke,” according to British media publication The Guardian.

The crayfish was hailed as a “hero,” by the news outlet and further praise was awarded to Jiuke who took the creature home as a pet following encouragement from other Weibo users. “I let him live. I already took him home and am raising him in an aquarium,” the user commented. As for the fate of the other crayfish in the pot served at the restaurant that night, their fate remains unknown.

The demand for crayfish in China is large, which makes the ethical questions of crustacean intelligence raised by the viral video significant. The crayfish industry in the nation holds a multi-billion dollar value and production of the farmed seafood tripled between 2007 and 2016 to take the total tons produced to 850,000.

Boiling crayfish – also known as lobsters – alive has come under immense scrutiny from scientists and animal rights activists. The Campaign Director of Crustacean Compassion, Maisie Tomlinson, claims that scientific evidence is compelling enough to show that it is highly likely that crustaceans feel pain similar to other animals, including humans. Her understanding may hold more merit than one first believes if the actions of the Internet sensation crayfish is anything to go by.

In 2014, a study published in Science Magazine said crayfish display human-like stress and anxiety responses to situations that frighten them. This told researchers that the creatures are cognitively complex vertebrates, even more so than previously understood. 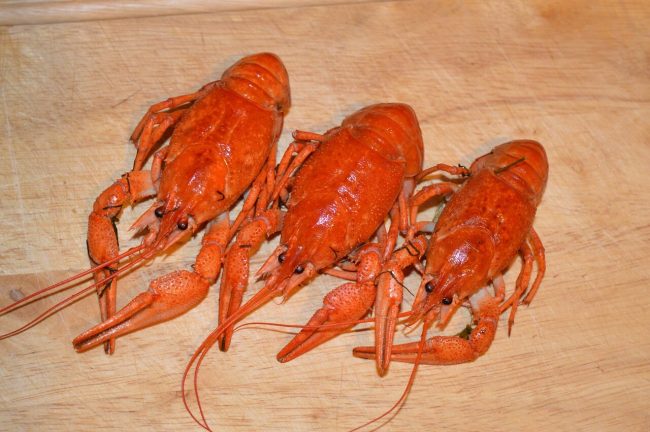 The U.K. may soon ban the food production method involving boiling lobsters alive and as of March 1st, this year, it has been illegal to do so in Switzerland. The nation enforced legislation outlawing the live boiling and transportation of crayfish as the government ruled the sea creatures need to be kept alive in their natural environment.

While eating crustaceans such as crayfish that have been stunned before their death or have mechanically-destructed brains is considered a by some to be a more humane way of preparing the creatures for consumption, people can still enjoy seafood without harming or killing any animal. Last month, it was reported that vegan seafood company New Wave Foods is developing plant-based crayfish and crab products to have a striking likeness to that of conventional seafood; the products would meet the demand for ethical seafood, similar to what it already does with its reputable vegan shrimp.