A new study was commissioned by vegan pea milk brand Ripple to analyze the differences between dairy milk and plant-based milk. The study looked at carbon emissions, consumer perception of milk nutrition, and marketplace share, among other factors.

The study highlighted the stark variation between dairy milk and plant-based milk when looking at carbon emissions. Researcher Stefan Unnasch of Life Cycle Associates found that the production of one liter of pea milk results in 387 grams of carbon dioxide emissions, mostly stemming from fertilizer use and water irrigation. The same volume of almond milk results in 396 grams of carbon dioxide and soy milk just one gram more.

In comparison, the production of one liter of cow’s milk produces 1,467 grams of carbon dioxide. This figure is more than three-and-a-half times greater than the highest carbon footprint of plant-milk. Unnasch also noted pea and soybean crops leveled out nitrogen in the soil, which reduced the carbon footprint of both plant species. 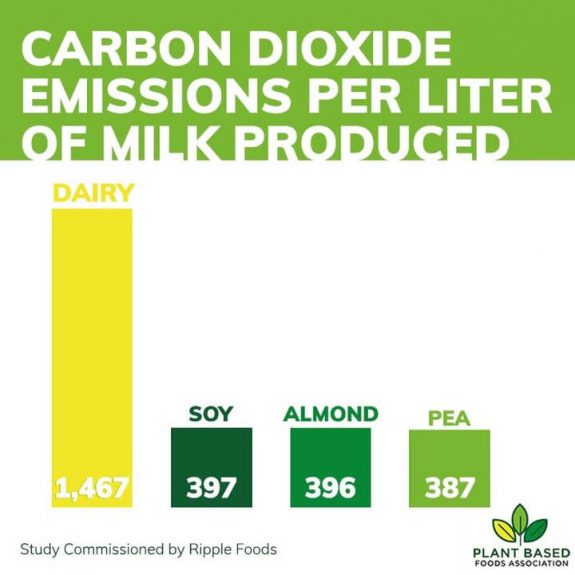 “All of the plant-based milks are far below dairy,” Unnasch said. “But on a protein basis, the pea milk is lower than almond.” In response, Almond Board of California representative, Molly Spence, said protein is not the first thing on a consumer’s mind while browsing the dairy aisle. “Nobody buys milk for its protein content,” she noted.

Spence pointed out other research suggesting almond orchards could mitigate half of the carbon emissions caused by production due to the way the trees retain carbon within their trunks and in the soil.

Alongside the growing number of reports highlighting the link between climate change and animal agriculture, the demand for such products is decreasing. According to the U.S. Department of Agriculture, dairy milk consumption has declined by 37 percent since the 1970s. More recently, fluid milk consumption per capita fell by 9.7 percent in the last five years, with dairy ice cream consumption also decreasing by 3.3 percent.

But according to research company Neilson, in the five years between 2011 and 2016, almond milk sales skyrocketed by 250 percent. Recent data affirmed this surging demand as the vegan dairy alternatives market made $9.8 billion last year, a figure that is projected to continue to rise.