The love for chocolate is universal, and a new study shows that the world is eating more vegan chocolate. Part of this rise in chocolate consumption is due to holiday-themed chocolates, and with Easter right around the corner, people around the world will be increasing their cocoa intake with dark chocolate eggs and solid chocolate bunnies.

A new report by Mintel Global New Products Database (GNPD) concluded that global chocolate consumption is on the rise, particularly around the holidays. Seasonal-themed chocolates represent twenty-three percent of the world’s new chocolate product launches, with the US and Germany leading the way. Further, in 2017, the production of Easter chocolates rose by twenty-three percent as consumers shifted away from the Peeps and toward the vegan chocolate Easter eggs.

The GNPD data also found that the British eat more chocolate than any other country in the world, weighing in at 8.4 kilograms (or 18.5 pounds) of chocolate per person each year. The UK is followed by Switzerland, Germany, Russia, and finally Austria to round out the top five most chocoholic countries. 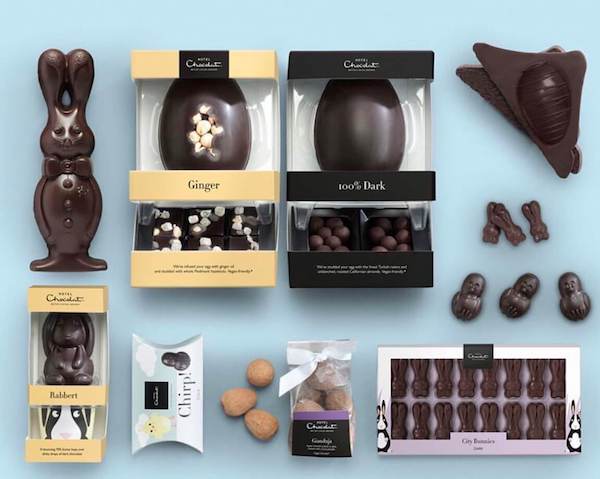 Further, GNDP found that there is a “strong interest and considerable potential for vegan chocolate across Europe.” The study noted that about half of chocolate eaters in Spain, France, Poland, Italy, and Germany were “interested in vegan chocolate.” In 2017, eight percent of the new chocolate launches in the UK were vegan, though the study expects this number to rise in the future. Marcia Mogelonsky, Director of GNPD Insight, stated, “There’s currently a focus on plant-based eating in the chocolate sector. Manufacturers have responded to the growing interest in plant-based diets by replacing dairy milk with nut-or-grain-derived milks in milk chocolate products.”

Due to the increasing global interest in plant-based chocolate, vegans can celebrate Easter with more than just jelly beans.